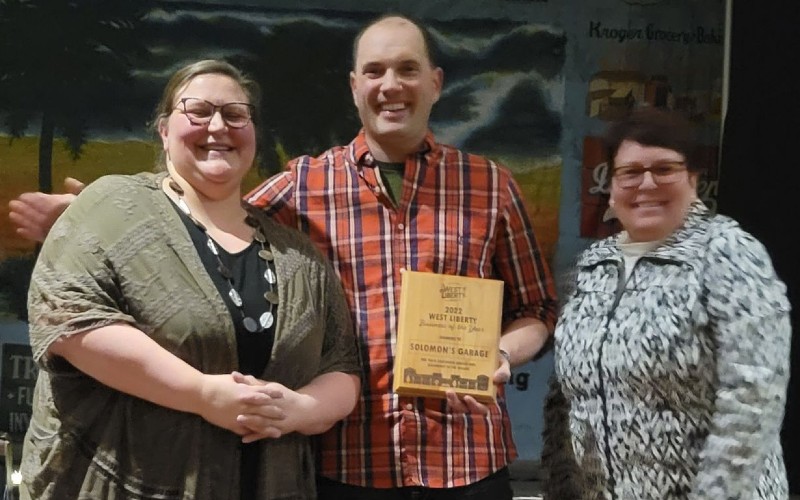 Heather Chamberlain, President of the Business Association, welcomed those in attendance and thanked them for being there. JD Harshfield, from Ohio Caverns, offered a very heartfelt memorial for Eric Evans, the owner of the caverns, who recently passed away. Musical selections were then performed by students from West Liberty-Salem High School, and dinner was prepared by Peppercorn’s Diner in Urbana.

The speaker for the evening was Todd McCormick from the Logan County Historical Society. McCormick spoke about not only the history of West Liberty but also many former residents who made history through their accomplishments or inventions. He showcased many of the items that are featured at the museum that have ties back to West Liberty. He brought along many amazing photographs and items from their collection.

West Liberty Mayor Jill McKelvey gave some thoughts on her appreciation for the business members in attendance and their importance to the village. In the past year, the West Liberty council has created the Community Reinvestment Areas that include the entire incorporated areas of the Village where property owners can receive tax incentives for investing in real property improvements. The Community Reinvestment Area (CRA) Program is a direct incentive property tax exemption program.

Jayne Griffith, with the West Liberty Village Council, also spoke about the fundraising they have been doing to raise money for the West Columbus Street Bridge project. They are currently selling sponsorships for the 2024 West Liberty Calendar. 2023 Calendars are also available through the Village office.

The 2022 Business of the Year was awarded to Solomon’s Garage. Owners Dave and Katie Neer both grew up in West Liberty and graduated from West Liberty-Salem High School. They opened Solomon’s in 2012. Not only are they outstanding business owners willing to offer support to new entrepreneurs when they opened Neer & Farm, but the countless hours they have given to the WLBA through Katie’s work as secretary and Dave and his team of technicians who provided judging for the first car show during the June Street Market.

All members are encouraged to participate in the monthly meetings, as well as any event committees.

The next monthly meeting will be held on Thursday, February 9th at 5:30 pm at Mad River Farm Market.

If you are interested in joining the West Liberty Business Association, you are asked to email [email protected] for more information.