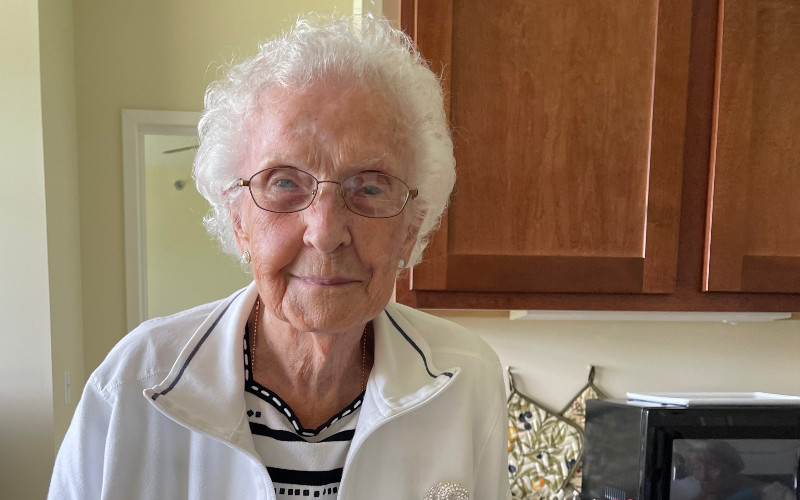 Stanfield grew up on South Hayes Street in Bellefontaine (south of Dairy Queen) and attended Bellefontaine City Schools K-12. Stanfield, whose maiden name is Johnson, has many fond memories of BCS. She remembers going to football and basketball games at then-Bellefontaine High School. Currently, the building is home to Bellefontaine Intermediate School. Stanfield discussed the main study hall. There were over 100 students and they quietly worked. The teacher demanded “order” during study hall. Stanfield quickly recalled several staff members from her high school years. Don Geist taught biology, Miss Porter was the geography teacher, Mr. Henry was the history teacher, and Mr. Freedom was the principal.

Betty married Lewis Stanfield in 1941. Together, they raised a son and two daughters on a farm near Big Springs. Betty’s husband passed away in 2001. Her three children are still living. Stanfield has 8 grandsons and 12 great-grandchildren. 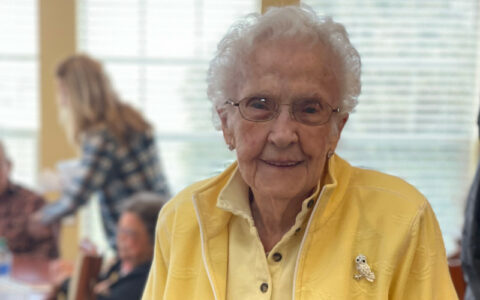 Betty grew up during the Great Depression. She said, “It was hard, but everybody helped each other. We didn’t have a car; we walked everywhere.” Betty vividly remembers going to the Holland Theatre when it opened in 1931. She said her teacher, Mr. Gibbs, sang at the opening ceremony.

Betty can remember her first TV that was purchased in nearby LaRue in the 1940s. Stanfield has never had major surgery. She just started using oxygen in July. Stanfield has lived at The Homestead at Logan Acres for 1 1/2 years. She stays active and continues to crochet and knit. Betty picked up a love for knitting as a child.

Stanfield has two keys to her healthy life. She said, “It’s thanks to the Lord and working on a farm for over 60 years.” Stanfield has been active for many decades. She tumbled as a kid and walked extensively as an adult. She continues to walk at The Homestead. Stanfield plans on a modest birthday celebration with family on Thursday. The Homestead celebrated her birthday earlier this month.

Betty kept her Christmas wishes simple this year. She said, “I don’t need anything. The Lord has been good to me.”