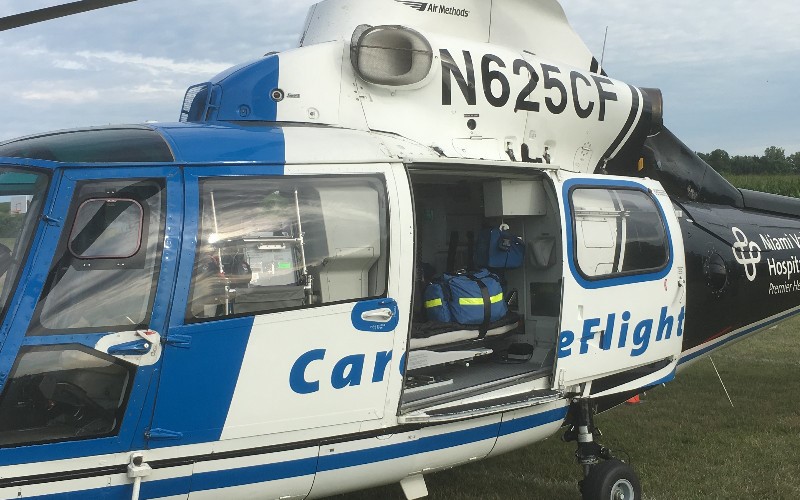 CareFlight was called out to a two-vehicle injury accident Monday evening just outside of Huntsville, near the cemetery.

The Logan County Sheriff’s Office reports Douglas Watkins, 64, of Belle Center, was driving on County Road 37, approaching the County Road 130 intersection, when he failed to stop at the stop sign and struck Landun Orich, 16, of Kenton.

Both vehicles went off the road and came to rest in a ditch.

Watkins, who was not wearing his seat belt, was not injured and was treated at the scene by Huntsville EMS and later taken to Mary Rutan Hospital.

Orich, who was wearing his seat belt was not injured.

He did have two passengers in the vehicle with him, Joyce Downey, 66, of West Mansfield, and Zoe Orich-Downey, 19, of Kenton.

Downey had her seat belt on but suffered serious injuries. She was transported to the helicopter pad by Bellefontaine EMS and then taken to Miami Valley Hospital by CareFlight.

Orich-Downey was not wearing her seat belt and suffered minor injuries. She was taken to Mary Rutan by BMRT EMS.

Authorities were on the scene for nearly 80 minutes.

Traffic light knocked down after car-semi accident in Bellefontaine