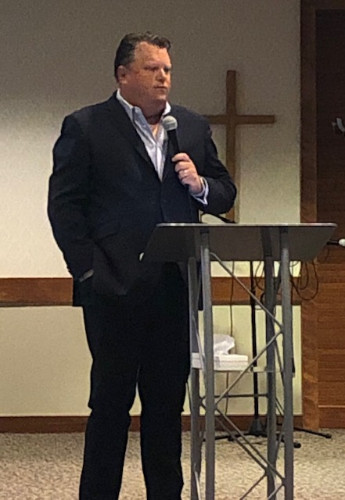 For the first time in three years, the Logan County Chamber of Commerce held its Legislative Impact Breakfast in person at Green Hills Foundation Hall.

Chamber President Ben Vollrath opened the morning session by discussing the challenges of job growth and economic development in Logan County.  One of the challenges is the shortage of natural gas.

Despite the growth in natural gas production, several areas of the state have little or no access to this affordable energy source (and Logan County is one of those places).

Cross feels it will not pass before the end of the General Assembly this year.  He thinks there are some sticking points that will need to be hashed out and there’s not enough time by the end of the year. However, he did say that they will just introduce it again in 2023.

Cross then went on to talk about keeping Ohio competitive.  He stressed how important it is to keep our youth here in Ohio.  He noted other states around us (Michigan, Pennsylvania, and Illinois) are giving college students incentives to leave Ohio for work.  Some of those incentives include student loan forgiveness.  He said Ohio needs to keep our future employees here.  They are working on a jobs growth plan that will address this issue and others.

Finally, Tim Barhorst addressed the audience.  Barhorst will be the new State Representative in the 85th district.  He won a three-way race in the May primary and will not have an opponent in November.  This seat has been held by Nino Vitale of Urbana.  Vitale was term-limited.  Barhorst hails from Fort Loramie and is new to politics.  This is his first elected position.  He will serve Champaign and parts of Logan and Shelby Counties.