The Logan County Chamber of Commerce held its annual Stars in Business Night of Recognition Wednesday at the Holland Theatre in downtown Bellefontaine.

Chamber President Ben Vollrath opened the evening with an overview of what has happened at the chamber over the last year.  Chamber membership has grown with 68 new members and there are now close to 500 members of the Logan County Chamber of Commerce.

The main event of the evening was the awards presentations. 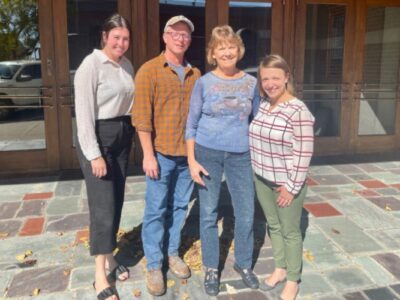 The Max Evans Tourism Award was given to Kris Swisher (3rd from left).  Kris was one of the driving forces behind the rejuvenation of the Holland Theatre in Bellefontaine.  She has volunteered countless hours at the theatre.  She is currently Board President of the Logan County Landmark Preservation & the Holland Theatre.

The Nonprofit of the Year was awarded to the Downtown Business Partnership.  The DBP reformed a few years ago due to the growth in downtown Bellefontaine.  The DBP went from hosting 1 major event a year (the Christmas parade) to hosting 3 or 4.  Recently, they decided to take on the tall task of hosting one event per month.  They launched the “First Friday” series where they hold a special event downtown on the first Friday of every month.  Due to their growth, they decided to hire a full-time manager for downtown.  Micky Groves was recently hired to fill the position.

The Young Professional of the Year went to Shannon Reese. This award is given to an individual between the ages of 20 and 40 who has devoted significant time to improving the quality of life of others through community service and is actively developing leadership skills in themselves and others. Shannon is the Marketing Coordinator with Small Nation and an Indian Lake School Board member.

The Emerging Business of the Year went to Prescription Bliss.  Four years ago, Andrew and Jennifer Brewer left their jobs at Honda to open Prescription Bliss in downtown Bellefontaine. Prescription Bliss works directly with physicians, prescribers, and participating medication drug providers across the United States to help eliminate or reduce the financial burden of high-cost prescriptions.

The Small Business of the Year was given to Elle A. Design.  Lindsey McGlone owns the business in West Liberty.  They produce several projects in the community including the Indian Lake Chamber Guide. 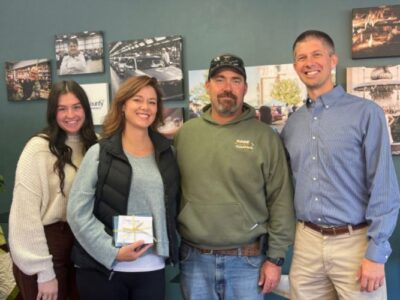 The Entrepreneur of the Year went to the husband and wife team of Jeremy and Erin LeVan (pictured middle).  They own and operate LeVan’s Excavating.  Jeremy started the business with a backhoe doing small jobs and has grown the business to one of the top excavators in the area. Jeremy and Erin have also created several other businesses including doing property development in Logan County.  Jeremy also started a new venture three years ago when he and his friend Matt Hull created the Country Legends Concert Series for the West Liberty Labor Day Festival.  Jeremy and Erin both credited their parents for shaping who they are today and said they are doing everything for their two children. 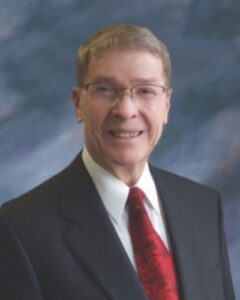 The Richard J. Rupp Leadership Award was given posthumously to Harold Marker.  Harold passed away on September 6 of this year.  Harold and Bob Thomas formed Thomas and Marker Construction in 1966.  In 1983, Harold became the sole owner of the company, which continues under family leadership with offices in Bellefontaine and Columbus.

Harold’s community involvement included serving 37 years as a trustee of the Sloan Industrial School, a member and past trustee of the First United Methodist Church, a former director of the Bellefontaine Federal Savings and Loan, a past director of Quincy Castings Inc., and a member of Bluffton University President’s Advisory Board, U.S. Representative Mike DeWine’s Academy Review Board, and BCS Permanent Improvement Committee. Recognitions include the 1998 Sam Walton Business Leader Award, 2007 Bellefontaine Kiwanis Citizen of the Year Award, 2014 Ohio Northern University Distinguished Alumni Award, 2015 Bradford Schools Distinguished Alumni Award, and 2015 Ohio Northern University Lehr Society Inductee. Harold and his wife Barbara have generously given to a plethora of organizations including land for the construction of the YMCA.

The evening concluded with an after-party held at the Syndicate in downtown Bellefontaine.