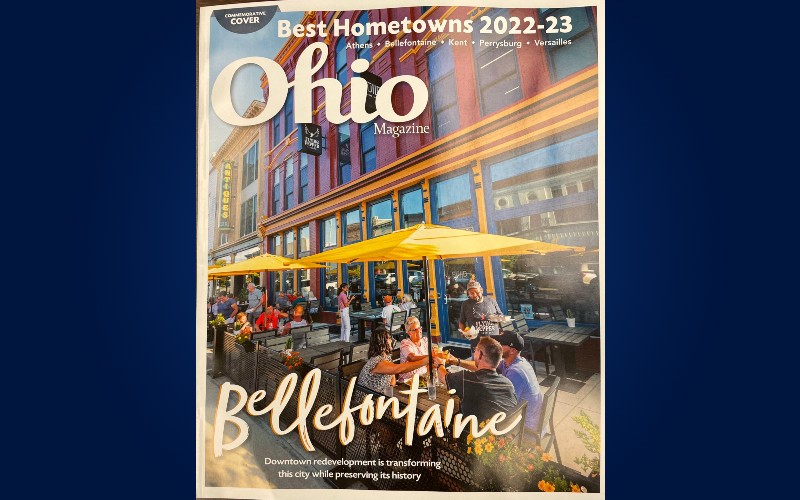 Mayor Ben Stahler, in his remarks, handed out copies of the November-December issue of Ohio Magazine. The publication features Bellefontaine on the cover, with a feature article as well. In conjunction with the magazine feature, the mayor announced a “Best Hometown Celebration” in front of the courthouse on November 4th.

The editor of Ohio Magazine will present a commemorative magazine cover as a part of the event. It gets underway at 5:30 p.m. and will feature food trucks and a performance by The Fountainaires.

In other administrative reports, Service Safety Director Wes Dodds informed the council that his office received a resignation letter from a Bellefontaine police officer that takes effect November 9th. Dodds said that interviews have already been conducted and he hopes the Civil Service Commission will certify the list of candidates so the hires can be made. The department is still short an officer from the recent retirement of officer Greg VanBuskirk.

Dodds also told the council that interviews for the soon-to-be-open position of Ambulance Billing Clerk, currently held by Lisa Kennedy. Kennedy, having been employed by the fire department for 25+ years, announced her retirement effective at the end of the year. After reviewing over 100 applications, the offer was made to and accepted by an individual that will start in November.

Police Chief Brandon Standley updated the council on the upcoming department awards ceremony that will honor officers of the department as well as citizens. The ceremony will be held at the airport on November 10th, with the social time beginning at 5:15 p.m. and the ceremony itself getting underway at 6 p.m. The keynote speaker will be motivational speaker Roy Hall, Jr.

Chief Standley also told the council that he received word from Ford that all 2022 police vehicles have been canceled by the automotive manufacturer. To that end, there are no 2022 models available. He did say that Ford promised to honor all the canceled orders next year and he hopes to receive the replacement cruiser by the winter of 2023.

Logan County Chamber of Commerce President Ben Vollrath reminded the council that the Middle School Career Day is coming up Friday at Riverside. The event is for all county seventh graders that give them a chance to experience the many career options that are available to them in Logan County. The event starts at 9 a.m. and wraps up by 3 p.m.

The Legislative portion of the meeting saw ten ordinances given various readings, all dealing with budget appropriations. One ordinance, given its third and final reading, authorized the hiring of a part-time temporary manager for the police department evidence room. That ordinance was adopted.