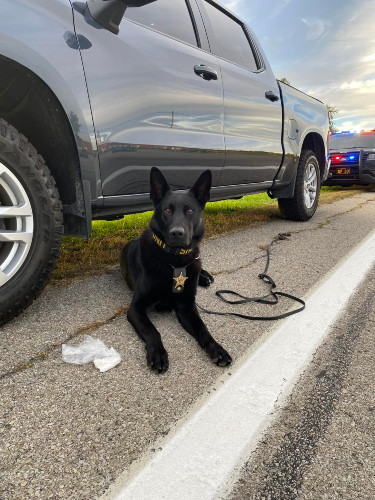 On Thursday (October 6th), authorities located Adrian Gregory, 36, of Sidney, at a residence in the 13,000 block of Ash St. in Lakeview.

Gregory, a fugitive, was wanted on numerous drug-related warrants out of Shelby County.  After a brief standoff, Gregory was taken into custody without further incident.

Task Force Officers also made contact with Milecha Whitacre, 45, who was out on bond for a previous drug-related offense.

She admitted to officers that she had fentanyl hidden on her.

Whitacre was found to have over 14 grams of fentanyl concealed.

She was placed under arrest and lodged in the Logan County Jail for a probation violation.

Additional charges for felony possession of fentanyl were sent to the Logan County Prosecutor for their review.

Back on February 25th, 2022, Whitacre was arrested for possession of fentanyl and brought to the Logan County Jail.

During the booking process, it was discovered that Whitacre had conveyed a large amount of fentanyl into the jail, concealed on her person.

She intentionally ripped open the bag of fentanyl, in an attempt to destroy evidence, causing fentanyl exposure to six correction officers and Task Force Officers.

A traffic stop was conducted in Russells Point at Madison Avenue and Lincoln Boulevard.

Officers then assisted compliance officers with the Logan County Court of Common Pleas in searching her residence.

6.9 grams of meth was recovered from the residence.

This was a result of a lengthy investigation by the Task Force.

Additional charges for trafficking in methamphetamine are being forwarded to the Logan County Prosecutor’s Office for their review.

The Logan County Unified Drug Task Force is dedicated to stopping the flow of dangerous drugs into the county.

Over the last three weeks, the Task Force has seized approximately 105 grams of methamphetamine, 41.6 grams of cocaine, and 14.5 grams of fentanyl.

Road work this week in the county