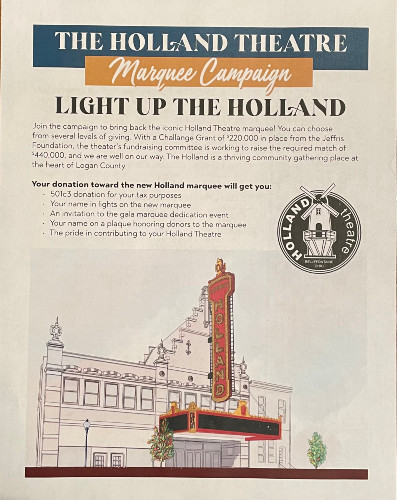 The Holland Theatre looks to get a major facelift, thanks to a $220,000 Challenge Grant from the Jeffris Foundation. The theatre officially kicked off its Marquee Fundraising campaign last night. The marquee, a fixture of the theatre in 1931, will be the finishing touch to the restoration project started several years ago.

The grant from the Jeffris Foundation covers one-third of the total cost of the marquee. The balance, $440,000, must be raised by the theatre. According to Holland Theatre Board President Kris Swisher, the committee will be spearheading the campaign to raise the funds in the three years allotted by the Jeffris grant.

Swisher noted that the amount that needs to be raised is significantly less than what the theatre raised during the bulk of the restoration project previously completed. She hopes that the promise of seeing the lighted marquee in front of the theatre as in days past will motivate the community to rally behind the project.

Interested supporters can get involved in several ways. There are six different levels of support available in the capital campaign. Level One is a Buy-a-Bulb, where individuals or families can purchase a bulb for $100. Level Two supporters will be able to purchase the announcement of a birthday or anniversary on the LED marquee for $100.

Level Five Supporters can sponsor a letter on the blade, or vertical surface, of the marquee for $20,000 per letter. The Sixth Level, called Pinnacle Supporters, will see their initial or logo on the pinnacle of the blade for one year. This level of support is $50,000 per year and are both sold.

For more information about supporting the Marquee Campaign, contact the theatre at 937-592-9002 or email office@thehollandtheatre.net