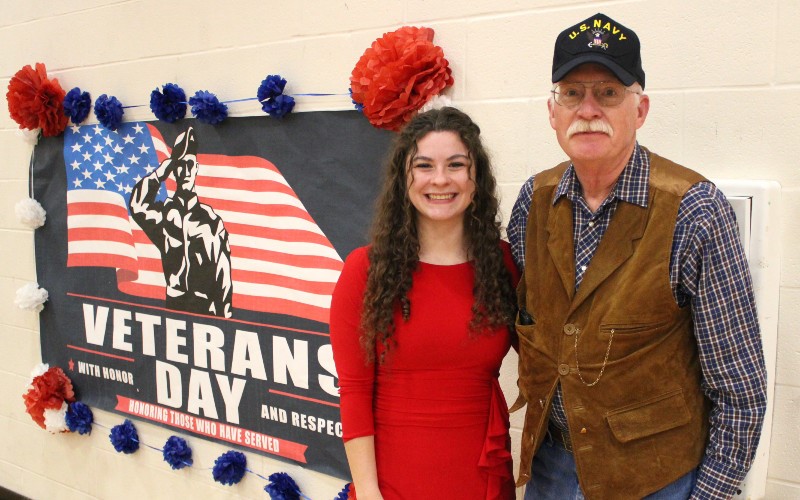 The event began with a meal in the ILHS Auxiliary Gym. Indian Lake Senior Lily Jenkins dined with her grandfather, Navy Veteran Mark Zeller. Jenkins plans to follow his lead by joining the military. She is currently in the application and interview process to be accepted into the United States Naval Academy with hopes of becoming a fighter pilot.

“She’ll be flying fighter planes! I’m proud of her, obviously. She’s got a lot to go through,” said Zeller.

As a Gunner’s Mate Gun Second Class during the Vietnam War, Zeller was on the water for four years, stationed among other places, at Guantanamo Bay, Cuba.

Jenkins said she loves to hear his stories of service.

“Me and grandpa, we talk all the time about Navy stuff. At family gatherings, we talk about planes and ships and I’m happy to follow in his footsteps,” she explained.

As a member of the ILHS Key Club, Jenkins helped fold the American flag into its triangle shape as part of an explanation of the folding procedure during the assembly following lunch in the ILHS Auditorium. Other high school students led the National Anthem and the Pledge of Allegiance, welcomed all the veterans and active service members in attendance by name, branch, and rank, and explained the significance of each branch of the military. Members of the Indian Lake High School Symphonic Band led the procession and playing of “Taps.”

ILHS Journalism students shared a video of interviews with several local veterans and staff members shared “selfies” with veterans throughout the program. Led by teacher Ed Rogers, government students helped decorate the stage with genuine Army Jeeps belonging to Indian Lake School Board member Steve Spath. In addition, members of the AMVETS Post #39 posted and retired the colors on stage.

Zeller was moved by the event, “It’s important for veterans to be honored and recognized for all the things they’ve done. We don’t know what’s going to happen tomorrow. Our servicemen and servicewomen are the ones that are between us and the bad guys.”

After the assembly, the crowd moved back to the gym, where students personally thanked veterans for their service with handshakes and desserts.