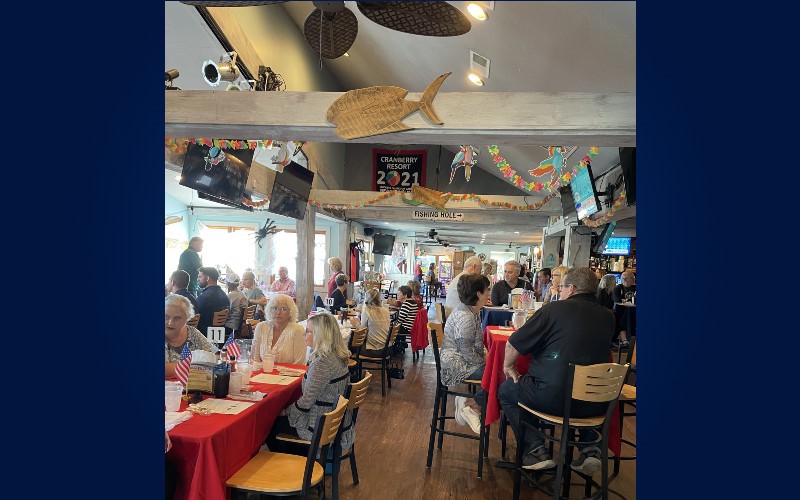 The Indian Lake Chamber of Commerce hosted a Legislative Update luncheon to a standing-room-only crowd at Cranberry Resort in Huntsville on Monday. Candidates for several offices were present including US Representative Jim Jordan.

First on the afternoon’s agenda was Ohio 83rd District Representative Jon Cross. Cross, of Kenton, highlighted his efforts to bring more than $500,000 to the lake region to aid in weed harvesting operations. He also outlined his plans to see to it that the Ohio Department of Natural Resources (ODNR) gets fully funded in the lame-duck session. Cross explained that it is his desire to secure funding for the ODNR so that as soon as the lake ice melts, work can begin to mitigate the weeds that have managed to grow.

Cross also praised local school systems and highlighted the importance of education and the role good schools play in innovation. He desires to see to it that schools and law enforcement agencies in his district are fully funded, getting the necessary monies in order to perform at the highest level. He vowed to continue to fight for small business owners, working to reduce regulations to make the climate more favorable for small businesses.

Republican Tim Barhorst spoke next. Barhorst, of Fort Loramie, is running unopposed for Ohio’s 85th District House seat this fall. The 85th District, which is comprised of Champaign and parts of Shelby and southern Logan counties, is currently represented by Nino Vitale who is not eligible to seek reelection due to term limits.

Next to address the gathering was current Ohio Supreme Court associate justice, Pat DeWine. DeWine, son of current Ohio Governor Mike DeWine, was elected in 2017 and is seeking reelection to his second six-year term. Justice DeWine told the crowd that the state Supreme Court is at a crossroads and the upcoming election will shape the direction of the court.

DeWine stressed the importance of combating the three what he called “activist liberal” judges that are currently on the court. If the conservative justices are all reelected, current Justice Sharon Kennedy will be named Chief Justice and the Governor can appoint another conservative justice to the court, giving the court a conservative majority.

The final speaker of the event was US Representative Jim Jordan. Jordan, who is seeking his ninth term in Congress, faces a challenge from political newcomer Tamie Wilson. Jordan, of Urbana, Ohio, represents Ohio’s 4th District which consists of sections of the northeast, central, and southwest regions of the state from Cleveland, Toledo, St. Marys, and the northeast corner of Columbus.

Jordan highlighted the choice facing voters in this midterm election. He cited a recent survey that showed over 55% of Democrats do not think that America is the greatest nation in history and questioned if it is wise to allow this group to continue running the country. He told the audience that he sees this election being about four key issues: the southern border, inflation, rampant crime, and attacks on our liberty.

Jordan delivered a litany of examples of what he sees as abuses of power perpetrated by liberals in Washington. He admitted that while his attention is mainly on what happens in Washington, DC, it is important for state and local elections to see conservatives elected. He also talked about the importance of conservatives taking control of the US Senate.

He thanked the crowd for their support and relayed that many people he has spoken to all over the country have “had it” with the way Liberals in Washington are governing.

Jordan did take a few questions, including one suggesting that he run for president in 2024. Jordan swept that notion aside and reiterated his support for President Donald Trump. His comments also were critical of the January 6th committee, the Justice Department’s handling of the raid at Mara-Largo, the current administration’s response to the pandemic, specifically Dr. Fauci, the issues at the southern border, gas prices, and the prevalence of false information coming from this administration.