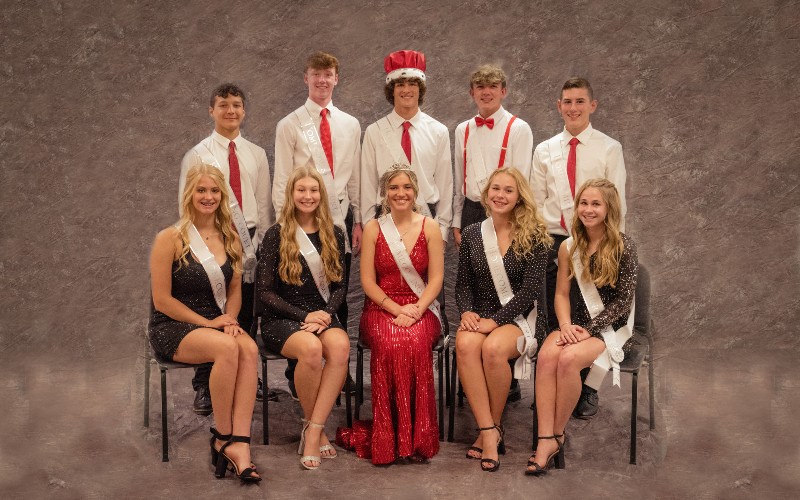 The Indian Lake High School Homecoming Court will represent their school during the Community Homecoming Parade and Pep Rally in downtown Russells Point on Thursday and the Indian Lake Homecoming Game on Friday night. This is the first time Indian Lake has honored a full court of male and female representatives from each class, along with a King and Queen.

Russells Point Police and Indian Lake Schools invite families, neighbors, and all Indian Lake Laker fans and alumni to line Main Street for the 2022 Homecoming Parade. This is the 14th annual event. This spirit-filled tradition will take place in downtown Russells Point on Thursday, September 22nd beginning at 6:30 pm. The parade will feature dozens of floats showcasing Indian Lake student-athletes, band members, local law enforcement, student organizations, staff, and the 2022 Homecoming King and Queen, along with the Court. Groups will hand out candy and other small prizes. The theme for this year’s Homecoming event is “Lakers Soar Over the Raiders!” Each high school class and clubs will decorate their float with the call signs of pilots from the Top Gun movie “Maverick.” In addition, establishments along the parade route are encouraged to decorate their exteriors. The ILHS Student Council will present an award for the business with the Best Spirit.

After the parade, Gathering Grounds will host a Pep Rally in the gravel parking lot near the shop. Cheerleaders will introduce the coaches, fall athletes, and the Homecoming Court. There will be a DJ and dancing to get the students, players, parents, and fans excited about the game against Ben Logan on Friday night at the ILHS Stadium.

Prior to the parade, Russells Point Police will close the west end of Main Street at 5 pm. Floats should approach the parade route from Township Road 239 at Midway. Students who are participating in the parade may be dropped off at the bike path pull-off at Twp. Rd. 239 or Paradise Island across from Indian Head Roadhouse.

Indian Lake Schools will host Homecoming Pregame Festivities at Laker Stadium on Friday, September 23rd. Spectator Gates open at 5:15 pm. The Parade of Cars featuring the King and Queen and Court will begin at 6:10 pm. The Marching Lakers will play at 6:40 pm. Kick-off is at 7 pm.

The Indian Lake Homecoming Dance is Saturday, September 24th from 8-10:30 pm under the bleachers in Laker Stadium.