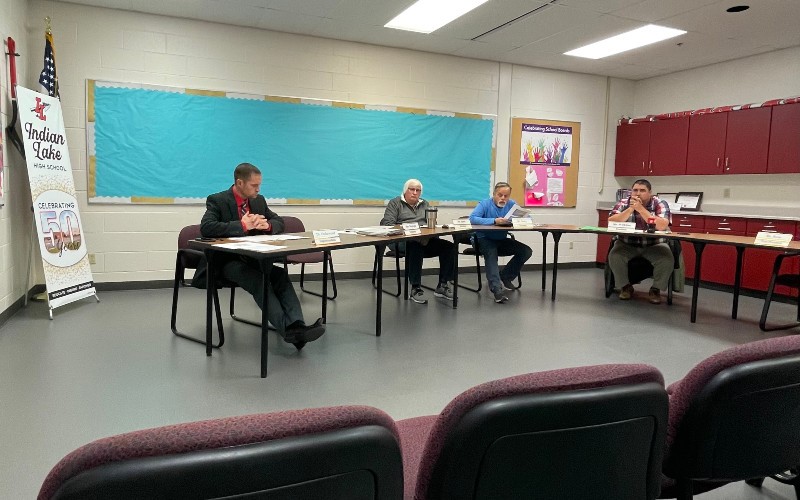 The Indian Lake school board saw a presentation by the school Key Club to bring in an emotional support dog for the district. The presentation, given by Cambria Tuttle, Riley Shaner, Kaitlyn Shaner, and Regan Ross spoke to the serious mental health issues that are plaguing school-aged children and how therapy animals can help.

Citing several studies, the girls and their sponsor, Jen Ignarski informed the board of the process that would need to be followed to bring in the therapy animal. Ignarski told the board that she is willing to house the dog at her home.

District Treasurer Coleen Reprogle updated the board about the state of the budget for the fiscal year 2023. She estimates the district will bring in $20,600,000 in revenue in 2023 and the district is looking at expenditures of $19,921,685. She also said that there is uncertainty beyond 2024 as the state of Ohio only budgets two years in advance.

In other board action, Superintendent Rob Underwood recognized freshman Regan Rash for qualifying for the State Cross Country meet.

Underwood also updated the board on the status of asbestos mitigation efforts at the school. While there is very little asbestos present in the school, Underwood said it would become an issue if it was ever disturbed. the board would need to hire a company to come in and remove the asbestos over summer break. The cost for just its removal would be in the area of $65,000 to $75,000.

He did say that there is $65,000 of contingency money built into the air conditioning project. In discussions with Reprogle, the project is fiscally feasible. Underwood did prepare the board that there may need to be some tweaking to the school calendar in order to accommodate the work.

The board also accepted a bid for a special needs school bus for $147,827 that will be delivered in 2024. Underwood noted that figure represents a roughly $30,000 increase from one year ago. He was informed that there may be funding available to help offset the cost of the bus.