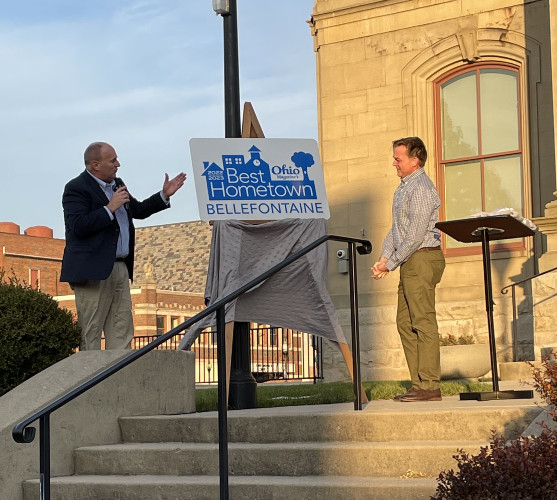 Sunny skies and unseasonably warm temperatures set the scene for the official designation of Bellefontaine as an Ohio Best Hometown at the Logan County courthouse. Several local leaders, including State Representatives Jon Cross and Tim Barhorst, were among the dignitaries that enjoyed the evening, punctuated by jazz selections courtesy of The Fountainaires.

The evening began with remarks from Bellefontaine Mayor Stahler. He acknowledged that it took a collaborative effort from many different individuals to achieve this recognition.

Logan County Chamber of Commerce President Ben Vollrath. Vollrath thanked local businesses and entrepreneurs for their commitment to the city.

Next up was Small Nation CEO and Downtown Business Partnership head, Jason Duff. He related to the crowd the invention of concrete at the hand of George Bartholomew. Citing that same entrepreneurial spirit, Duff recognized the people who power the downtown area and the numerous businesses are what make Bellefontaine so special. He recognized the manner in which the city looks to the future while keeping an eye on the past. He promised that the best is yet to come.

Also on hand was the editor of Ohio Magazine Jim Vickers. Vickers presented Mayor Ben Stahler with a commemorative magazine cover that features Bellefontaine that will be distributed in central Ohio.

From the press release:

Each year, Ohio Magazine recognizes places that make our state a great place to live. To determine this year’s honorees, Ohio Magazine solicited nominations in the spring and conducted visits across the state over the summer. The magazine’s editors chose Bellefontaine for its impressive downtown redevelopment efforts, thriving sense of community and appreciation for preserving local history.

“We’re truly blessed in so many ways that we are able to come together and celebrate the achievements of our community,” said Bellefontaine Mayor Ben Stahler. “There’s a real sense of hometown pride in the air!”

“The Best Hometown nomination for Bellefontaine, and especially for our beautiful downtown, is a well-deserved recognition,” added Micky Groves, Downtown Development Director at the Logan County Chamber of Commerce. “Our businesses and entrepreneurs have spent years of hard work and dedication bringing the downtown back to life with a multitude of retail shops, award-winning restaurants, and entertainment to experience.”