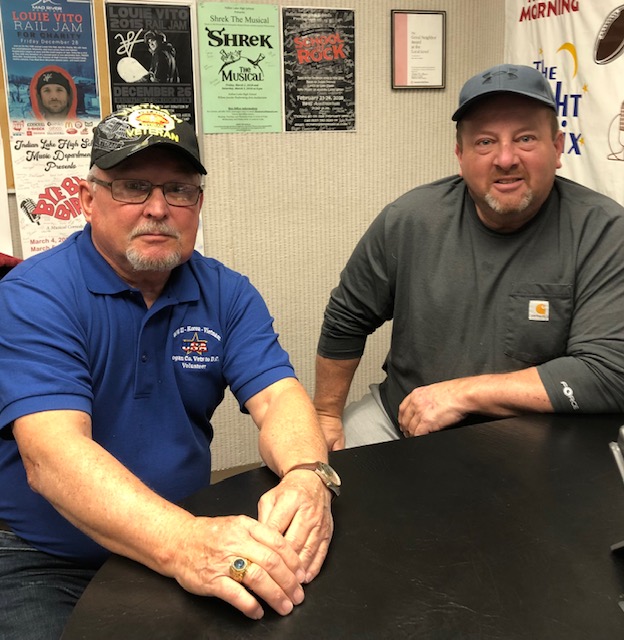 The Logan County Vets to D.C. is gearing up for another trip to our nation’s capital.

This is a trip organized by local volunteers that busses local veterans to Washington D.C. for a weekend to visit the memorials.  They leave on a Friday morning and return Sunday evening.  There is no cost for veterans to attend.  Travel, lodging, and food are all included.  Veterans may bring a guest for $250.

Sunday on In Sync we were joined by Scott Stewart, President of the Logan County Vets to D.C.,  and Curtis Fry, Vietnam Veteran and volunteer with Vets to D.C., on 98.3 WPKO.

Stewart says this is a group of volunteers who honor our veterans.  It’s important to not forget what our veterans have done for our country.  Vets to D.C. focuses on WWII, Korea, and Vietnam because we are losing them every day.

The process of putting on the trip takes about a year of planning.  They hold fundraisers throughout the year and open up the application process several months before the date.  The Monday before the trip, they hold a picnic inviting everyone to get to know each other before spending a weekend together.  On Friday, they gather at the Logan County fairgrounds for breakfast and depart for D.C.  They spend the entire day on Saturday at the memorials in D.C. before departing on Sunday for Ohio.

During the show, Stewart said that this year will be the final trip for Logan County Vets to D.C.

Stewart explains that over the years they feel they’ve exhausted all the local veterans from WWII, Korea, and Vietnam who wish to go on the trip.

This will be the seventh trip.

They will continue to honor veterans but in different ways.

Veteran Curt Fry, from DeGraff, went on the first trip in 2016.  Curt joined the Marines at the age of 17 in 1968.  He was shipped to Vietnam in 1969.  Curt was wounded when a division of North Vietnamese tried to come into his perimeter.  He spent five weeks in recovery before being sent back to his company.  He came home in 1970.  He spent about 10 years in the Marine Corp.  He was out for five years before joining the Army National Reserves for another 19 years.  Serving is a family tradition for the Fry family.  His grandfather was in the Army, his dad was in the Navy, his brother was in the Navy, his youngest brother was in the Army, and his uncle was in the Army and POW in WWII.

Curt said 2016 was his first time in Washington and said it was “heartbreaking” seeing the names of his friends on the Vietnam Memorial.  He also said it gave him closure and he found it easier to be there with a group of other veterans.  Since his first trip, Fry has been going back as a volunteer for the last five and plans to be there again for the final trip this fall.

This year’s trip will be on September 22, but the deadline for applications is May 1.

Stewart suggests filling out an application ASAP since this will be the final trip.  Get an application today by calling Scott at 937-407-6766 or go online to www.vetstodc.org.

This trip is open to all World War II, Korean and Vietnam veterans.  Stewart stresses that it doesn’t matter if you were deployed overseas or if you did your service in the U.S.

You can hear part 2 of our conversation with Scott and Curt next Sunday morning at 7:30 on 98.3 WPKO.