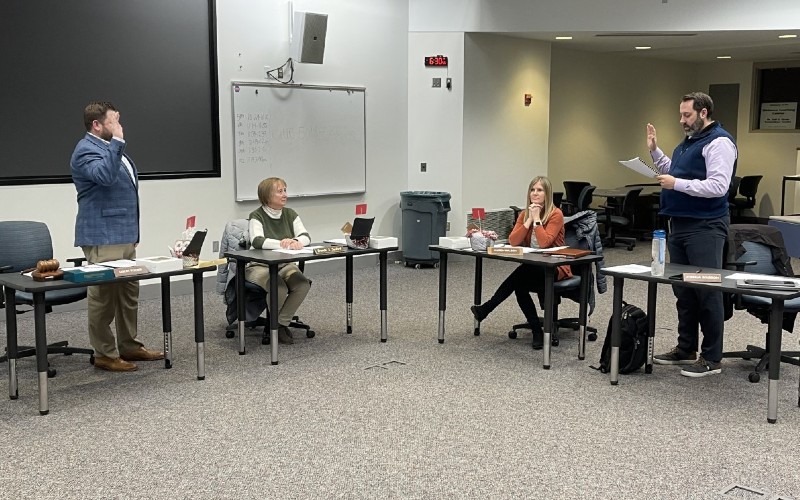 Colin Yoder (left) is sworn in as board president by Treasurer Josh Wasson.

The Bellefontaine Board of Education had its first meeting of 2023 Monday night in the Distance Learning Center.

First, the board met for their annual organizational meeting.

Colin Yoder was elected board president.

Yoder succeeds Brenda Sanford. She led the board for the last two years.

The board approved their meeting schedule for 2023.

Each monthly meeting will be held in the Bellefontaine High School Distance Learning Center at 6:30 p.m.

The Bellefontaine Examiner and WPKO Radio were designated as the official media outlets of the school district.

Brenda Sanford was appointed the OSBA alternate for this year.

After the organizational meeting adjourned, the board held its monthly meeting.

January is School Board Appreciation Month.

BCS Superintendent Brad Hall thanked the board members for their leadership and commitment.

Each board member was given a gift basket, cookies, and Marie’s Candies for their service.

Logan County Chamber of Commerce President/CEO Ben Vollrath addressed the board about a project on the city’s north side.

A group of investors is seeking a tax abatement to build an 80-bed Cobblestone Hotel next to Mary Rutan Health Center (near Route 33).

The land is owned by Mary Rutan Hospital.

Vollrath explained the benefits of a Community Reinvestment Area.

He said the hotel would generate Bed Tax dollars and boost restaurant and retail sales in Bellefontaine.

The proposal calls for a 100-percent tax abatement for 15 years.

In lieu of a tax payment, the investors would give approximately $10,500 to BCS per year during the abatement.

Currently, the property taxes on this lot generate $3,900 per year for the school district.

After much discussion, the board approved the tax abatement.

Bellefontaine City Council will consider the abatement during their January 24th meeting.

The investors would like to break ground this spring.

In personnel, the board accepted the resignations of 4th-grade teacher Vanessa Bumgardner and guidance secretary Barb Triplett.

Triplett will be retiring in June.

Jacob Watkins was hired as a 2nd-shift custodian at Bellefontaine Elementary School.

Benjamin Manbevers was hired as a substitute custodian.

A long list of substitute teachers was approved for the ’22-’23 school year.

Russ Hogue was approved as the varsity baseball coach.

Mike Mosbarger will be a volunteer baseball coach.

The board approved the job description of a bus/van aide.

The next board meeting will be on February 13th at 6:30 p.m. in the Distance Learning Center.