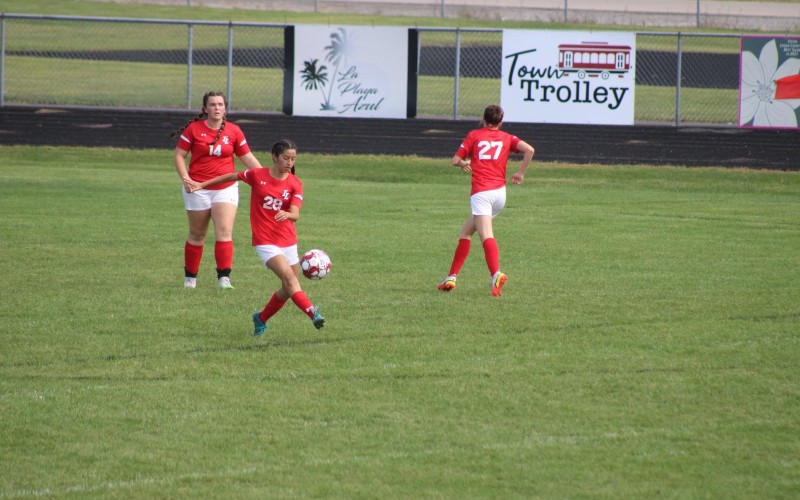 Scoring the lone goal for the Lady Chiefs was Ellie Mitchell.

The Lady Chiefs will play Graham on Tuesday at 7 p.m. in the first round of the soccer tournament.

The Chiefs will play Bethel in the opening round of the Division II soccer tournament Monday at 7 p.m.

The Benjamin Logan varsity girls ended their regular season with a 1-1 tie against Graham.

Rhea Harner scored the lone goal for the Lady Raiders off of an assist by Mya Burrey.

For the Lady Falcons, Rosey Dunham would put the ball in the back of the net to tie the game.

Benjamin Logan will kick off postseason play next Saturday, October 22nd at Urbana.

The game was called 30 minutes early due to lightning.

Michael Rostorfer and Eric Hughes scored for the Raiders.

Jacob Roth was credited with his 8th shutout of the season, which is a new school record.

The Raiders will host Kenton Ridge Monday in the opening round of the OHSAA tournament.

“It was a great night to honor our 3 male and 4 female seniors and after the girls played such an exciting game the rain held off enough to allow us to get through our senior festivities,” said Head Coach Jamie Hughes. “I’m honored and privileged to have been able to coach and get to know these 3 young men. Tonight was a great game and to be able to end our regular season, even if it was a tad short due to the weather. These guys have been a part of 35 wins (so far) and 2 league championships the last four years which is the most of any senior class in Raider history. I can’t say enough about how much they have meant to the program and how much fun the past fours have been with these guys and they will be missed.”

Shaner also tallied 2 assists, Meadow McCullough and Cambria Tuttle each had an assist.

Savannah Hill picked up 4 saves in the net.

Indian Lake will play #1 seed Tippecanoe on Tuesday at 7 p.m.