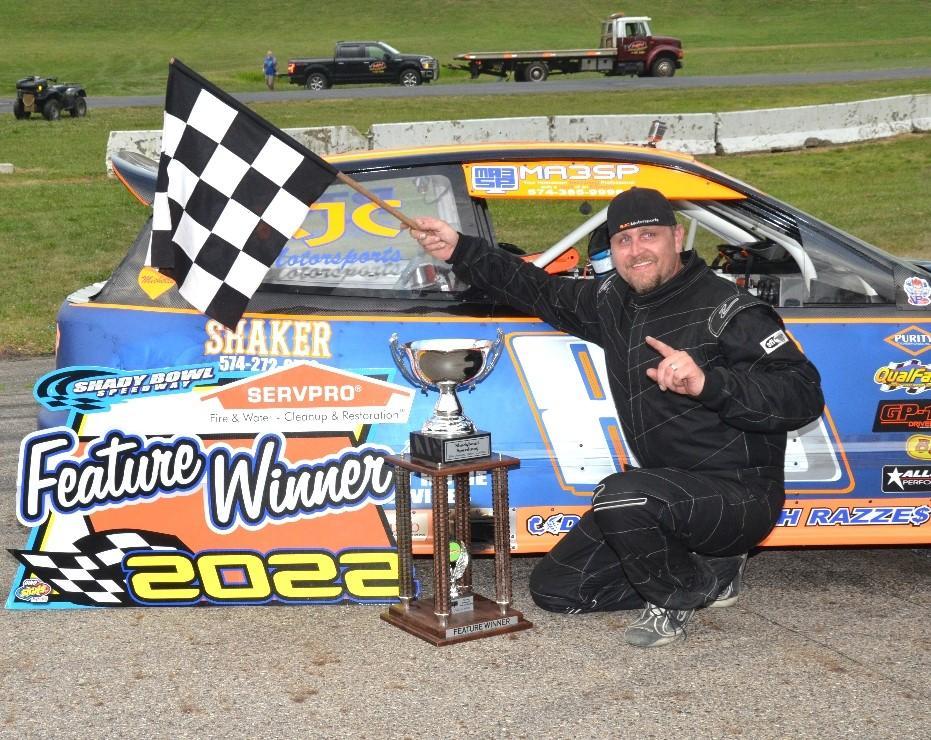 The stifling heat that has been making life miserable gave way to a lovely cool evening at Shady Bowl Speedway Saturday.

The VORES compact series headlined the night’s action, as they competed in the fifth running of the Bowl Classic presented by Servpro. A full field of 28 cars took the green flag to start the 50-lap event.

Veteran driver, Tom Gossar, took the lead as the field dove into turn one. A mix-up caused a complete restart, with Gossar once again leading the way.

The race was red-flagged on lap eight when second-place running Holli Eaton and Gossar made contact at the flag stand. The end result was Eaton head-on into the wall. It took EMTs a few minutes to get Eaton out of her car. She was then met with a roar from her hometown fans greeting her. Holli revealed Sunday morning she was a little sore, but otherwise fine.

On the restart, it was Gossar once again out front. He led until lap 13 when defending series champion Chris Jennings blasted by to take the lead. Jennings, who won the first race of the season back in March, built up a lead as the laps dwindled down. Remember the warning on car mirrors “objects in mirror are closing than they appear?” Well, Jennings saw a Honda Civic coming and it was close. Oceola, Indiana driver Jason Clevenger sped by Jennings and opened up a lead until the checkered flag. The beautiful Honda Civic he was driving was sponsored by RCJ Motorsports. Jennings held on for second followed by Gary Eaton Jr., Gossar, and Ron Sagers.

The Wooten Automotive and Towing of Saint Paris Modifieds were up next. Bellefontaine driver Logan McPherson went to work and led every lap to post his first feature win of the season. The former track champion was behind the wheel of his family-owned open-wheeler. Fast qualifier (13.685) Chris Parker was second Daniel McPherson was third, Mike Pippin was fourth, and Josh Smith was fifth. The race was red-flagged on lap 8 for a multi-car wreck on the back chute. No one was injured, but Austin Eaton’s ride took the brunt of the damage. Eaton was the dash winner with Logan McPherson and Greg Winget taking heat honors.

The rained-out Wooten Automotive and Towing make-up feature from June 11th was won by the ageless one, Jerry Stapleton. It was the third win of the season for Stapleton in his T.C. Holzen-sponsored car. Josh Smith, Logan McPherson, Kyle Purvis, and Buck Purtee rounded out the top five.

The Harrod Septic Solutions Compacts were up next. 23 cars took the green from starter Charlie Gifford to start the 25-lap feature. Jordon Sage in Damien Weigel’s 08 led the first eighteen counters before Jimmy McElfresh took over for two laps, then Sage took command again. On lap 23 New Carlisle driver Devin Glessner took over the lead, Glessner led the final laps to post his first career win in his Quick Parts Cavalier. The win came on his 19th birthday. Steve Duty, was second, McElfresh was third, Scott Henson fourth, and Alec Young fifth. Glessner was the fast qualifier with a 16.888 lap. Young carried the dash checker, Heat win honors went to Zach Beatty-Lakins, Kolton Morgan, and Dominic Smith. Sage and Bobby Terry were disqualified after failing a post-race inspection.

The Bullet Liners of Dayton Thunder Cars rounded out the night’s program. Buck Purtee of DeGraff seems to be unstoppable as he has won every event thus far. He is edging closer to a $500.00 bounty if he continues to win. Purtee’s Bryce Realty Monte Carlo was followed by Scott Drake, Corey Wooten, Robert Roush, and Hunter Hicks. Wooten paced the field in time trials with a 15.530 lap. Brad Blue won the dash and Purtee the heat.