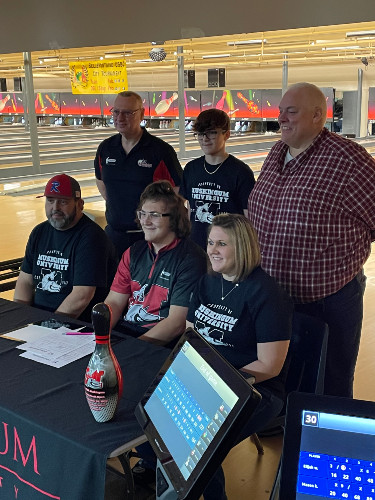 Riverside senior Zander Crouch made it official and signed his national letter of intent to bowl for the Fighting Muskies of Muskingum University at TP Lanes last night. Crouch, a four-year varsity letter winner for the Pirates, will enroll at Muskingum this fall and join Muskie Head Coach Doug Smith’s squad.

Pirates boy’s bowling coach Zerah Crouch, also Zander’s father, said that Zander has embraced a bigger leadership role with his squad this year. “He’s a team leader,” the coach said, “and he has bowled in the fourth and fifth spots all season.” Coach Crouch said the team will lean on Zander’s leadership during the upcoming tournament season.

Zander said he picked Muskingum over a handful of other schools mainly because the campus felt like home to him when he visited. Zander has attended several tournaments that Muskingum participated in, and he respects the Muskie’s coaching staff for the help they give the athletes.

He also said that he thinks the Muskie’s will be good for several years and he looks forward to contributing to the success of the team.