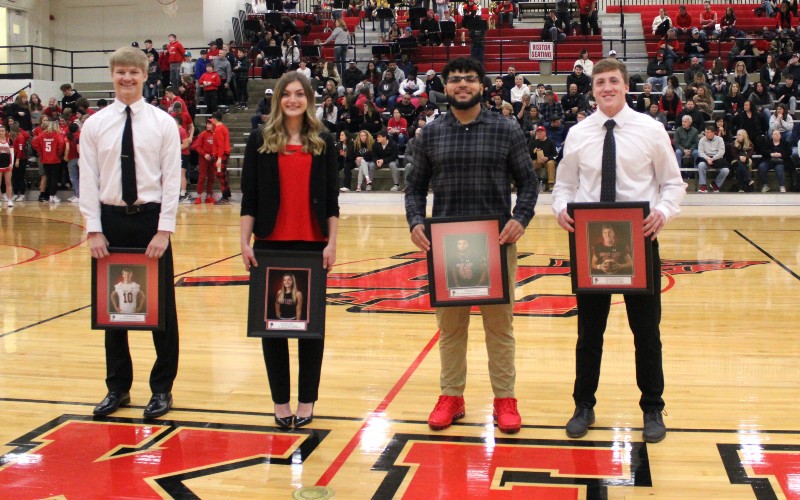 In order to be eligible for the ILHS Athletic Hall of Honor, an athlete must have excelled to the level of state recognition by the Ohio High School Athletic Association during their high school years. Each one was presented with a photo highlighting the state-level accomplishments. The honorees then placed their picture in the Hall of Honor after the ceremony.

Luke Jackson is a two-time recipient of state honors. He was chosen as a First Team All-Ohio Football Linebacker in 2020 and repeated the honor in 2021. Jackson was also named CBC Defensive Player of the Year in Football and helped the Lakers to a league title his senior year. Luke was also a decorated member of the Indian Lake basketball and baseball teams. Jackson is currently a member of the Wittenberg University Football team. He is the son of Ray and Colleen Jackson.

Elijah Slagle was selected as an Honorable Mention All-Ohio Football Running Back. Slagle was a record-setting rusher for the Lakers, earning First Team CBC his senior season and second team his junior and sophomore seasons. Elijah was also a valuable member of the Indian Lake Men’s Track team. Slagle is currently playing on the Muskingum University Football team. He is the son of Justin Slagle and Mindy Slagle.

Allexxie West qualified for the State Indoor Track Meet in 2021 and again in 2022. She earned 7th place in the 2022 triple jump event. West was a strong member of the ILHS Women’s Track team, earning Second Team CBC as a member of the 400-meter relay and Special Mention for the 100-meter high hurdles. She also earned First Team in Cheerleading as a member of the ILHS Football, Basketball, and Competition Cheer Squads. Allexxie is the daughter of Jeni West and the granddaughter of Fred and Denice Farley. She is currently a student at Anderson University.

Caleb Wurster earned Second Team All-Ohio as a Football Quarterback. Caleb was also the First Team CBC Quarterback in his senior season and the CBC Basketball Player of the Year in 2022. He was also a decorated baseball player for Indian Lake, earning second-team honors in his junior and senior seasons. Wurster is currently a member of the Edison State University Baseball team. He is the son of Dean and Jill Wurster.

Cronkleton, Henry and ’70 CC team to be inducted into BL Athletic Hall of Fame