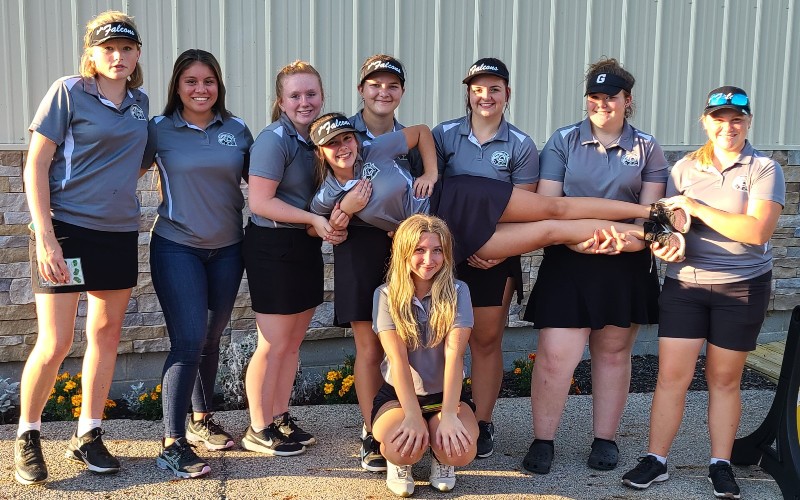 For the Falcons, Zoey Merritt was the medalist with a season-low of 36. Bella Odle carded a 50, Grace Bowers had a 56, Madison Murphy and Ryleigh Schafer both tallied a 60, Grace Tyler and Lilly Dulen each shot a 62, and Kailey Dowty recorded a 63.

Kensley Lacher led the Raiders with a 46, Kate Hahn chipped in a 61, Malori Barnes scored a 61 and Gi Saunders added a 70, both new personal records for Barnes and Saunders.

Reaghan McDaniel was medalist, shooting a season-low 39. Emma Saylor had a 64, Ava Klingler shot a 67, Cassie May and Zoie Armbruster both recorded a 68, and Allison Estep carded a 76.

For the Pirates, Jaxon Woods was medalist with a 42, Drew Jones carded a 45, Gavin Robinson shot a 52, Reece Jenkins had a 55, Ayden Clary recorded a 56, and Hayden McCully tallied a 58,

Leading the way for the Tigers was Eli Adkins with a 50, Greyson Horsley was right behind him with a 51, Collin Thompson shot a 53, Leland Henry had a 55, Owen Barger and Luke Thomas each carded a 58, Teagon Miller tallied a 59, Silas McCombs shot a 66, and Aiden Taylor had a 74.

West Liberty-Salem will look to bounce back Monday against Cedarville at Liberty Hills.