The Laker varsity girls won the race with 42 points. New Bremen followed in second with 51 points, Benjamin Logan was right behind in third with 59 points, and Lima Shawnee was fourth with 78 points. 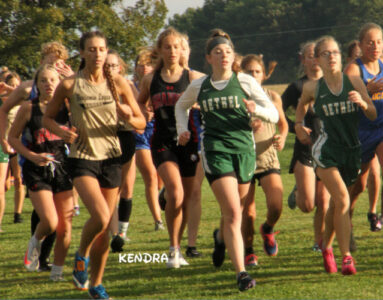 Also competing for Benjamin Logan were the following athletes:

The Benjamin Logan boys finished 4th out of 8 teams at Indian Lake.

The Raiders will run again Thursday at the Kenton Invitational.

The Bellefontaine varsity girls took 2nd out of 7 teams at the North Union Invitational Saturday.

The Bellefontaine varsity boys placed 3rd out of 10 teams at North Union Saturday.

Tony Stewart and Gavin Wilson finished strong to place 1st and 2nd in the field of 93 runners.

“I like the movement the team made throughout the race,” said head coach Ben Davis. “Tony and Gavin were 10th/11th at the mile and 5th/6th at the two before their 1-2 punch.”

The Lady Tigers placed 16th in the championship race.

“This was a tough test for our young team, and I’m proud of the way they embraced the challenge to get better against nationally ranked teams,” said WL-S head coach, Ann Vogel. “I loved the fight our team showed, moving up two spots in the team scoring during the final mile of the race.”

The Lady Tigers ranked #5 in the latest DIII state coaches poll and will compete Wednesday at the Dave Lightle Invitational in Tipp City.

The Tiger boys, who are #3 in this week’s D3 OATCCC state poll, finished 17th out of 27 teams at the Centerville Night Race.

In the JV race, the Tigers finished 2nd out of 23 teams in the Open II Race.

Bellefontaine’s Grace Brown went to Cincinnati to race the #2 ranked runner in Ohio at the St. Xavier Invitational.

Grace remains unbeaten on the season.

The rest of the Lady Chiefs competed at the North Union Invitational and won the meet.

Jake Moreland and Oliver Grandstaff led the way for the Chiefs placing 1st and 2nd overall.

Other medal winners for Bellefontaine were Brenden Murray in 11th and Will Myers in 14th.

Sennet Stolly and Andrew Myers competed in the mile run at North Union. Stolly placed 5th and Myers was 6th.

The Raider boys’ team also placed second, edging out Indian Lake after a tie went down to the sixth runner.

The Little Laker runners competed in the 1-mile Fun Run at the Jean Newmeyer Indian Lake XC Invitational. Jean Newmeyer was a longtime MS coach who had a passion for youth running. She hosted many youth races and we are happy to continue the tradition.

The Lady Tigers finished 2nd out of 11 teams.