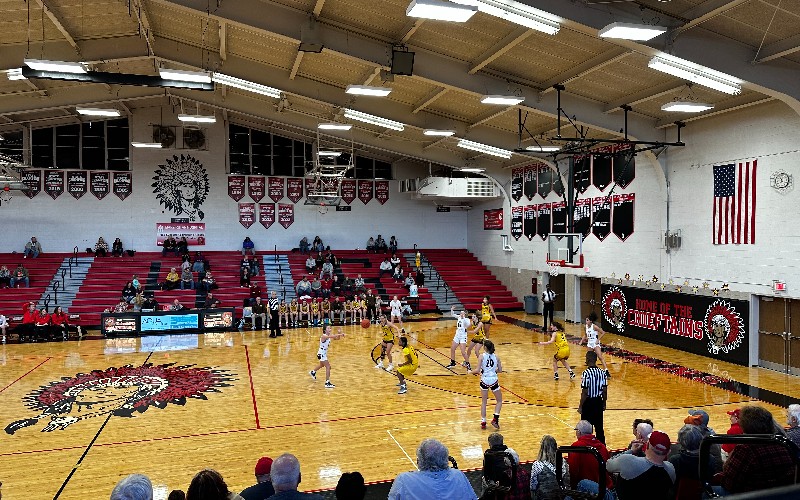 In a game streamed at peakofohiotv.com, the Bellefontaine varsity girls ran past Kenton Ridge Saturday afternoon 57-41.

The Lady Chiefs started the game off with an 11-0 run.

Turnovers spelled disaster for KR as they committed 23 for the game, 12 in the first half.

Leading the charge for Bellefontaine were Lexi Robinson and Tiffany Boop with 18 apiece. Quinlan Zedeker pitched in 15.

Bellefontaine will be back home Wednesday hosting Graham.

The Benjamin Logan varsity girls edged past Graham 52-49 in overtime.

Mia Stahler hit the game-winning half-court buzzer-beater for the Lady Raiders. She led the way with 24 points and 12 rebounds, Lahna Cook pitched in with 7 points, and Kyndal Cronkleton had 6 points.

Benjamin Logan improves to 7-8 and will travel to Jonathon Alder Wednesday.

The JV Raiders are 8-2 and will travel to Marysville Tuesday for a JV-only contest starting at 4:30 p.m. and then to Jonathon Alder on Wednesday with the varsity.

The Lady Cardinals will play Monday at home against Ridgemont. This will be a varsity-only contest starting at 6:00 p.m.

The West Liberty-Salem varsity girls needed overtime to get past Cedarville 40-39.

Cedarville beat WL-S in the JV game 31-24 in overtime.

CJ Wilson led the Chiefs with 22 points, and Carter Snapp, Tavien St. Clair, and Kaden Reames each had 9 points.

Bellefontaine improves to 6-5 on the season.

The Lakers were led by Caiden Nicol with 24 points, Lane Tucci had 18 points, and Camdon Tuttle recorded 16 points.

In the JV contest, the Tigers topped the Lakers 51-38.

Leading the way for WL-S was Jackson Steider with 16 points and JJ Johnson had 14.

Benjamin Logan will be back in action Monday against Johnathan Alder at 5:30.

Layton Watkins led Benjamin Logan with 8 points and Caden Powell chipped in with 7.

Case Teepe led the Hillclimbers with 14 points, Roman Swain and Drew Dixon each had 8 points, and Crew Forson chipped in with 6 points.

Grady Lantz paced the Hillclimbers with 17 points and BJ Potter had 8 points.

Lucy Cole led the Tigers with 7 points, Belle Sarver had 5 points, and Grace Jones and Maddie Adkins each had 3 points