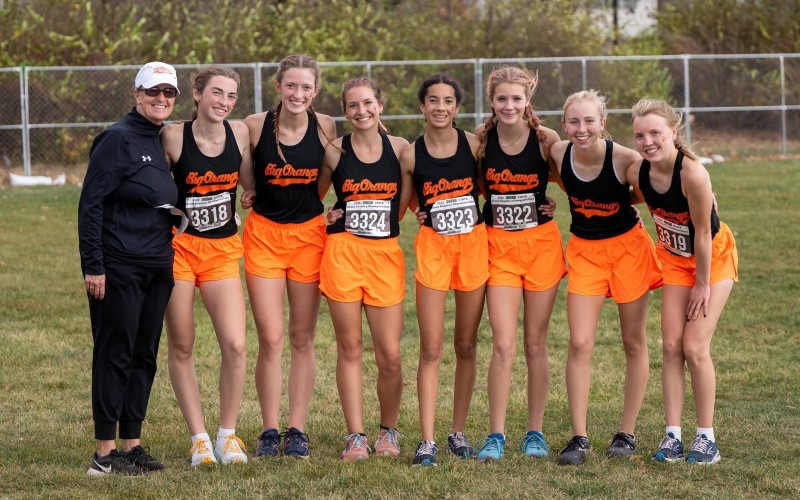 The West Liberty-Salem girls cross country team wrapped up its season with a fourth-place finish at the OHSAA DIII State Championships Saturday in Obetz.

“We have 18 girls on the team this year and all season we talked about the importance of everyone’s role on the team, and how when everyone does her part, we’ll have a successful season,” said WLS head coach Ann Vogel. “The girls ran their hearts out, and their teammates not running supported them every step of the way. I’m so proud of their effort and energy throughout the season. To finish in the top five is a testament to the investments our athletes make year-round to be competitive runners and supportive teammates.”

“It definitely was not the ending that we anticipated, but unfortunately with the combination of a slow start to the race and lingering illness from last week, we just weren’t able to get into the thick of the race. I told the guys that no matter the result today, it could not outweigh the love and appreciation I have for all sixteen of them. I’m extremely proud of the growth this team showed on and off the course this year. It was a remarkable season that included a conference title, a district title, and a regional runner-up. Those accomplishments are definitely something to be proud of. I’m especially grateful for Owen Harrison who competed in the last race of his high school career. He’ll go down as one of the most improved runners I’ve had the privilege of coaching. He’s an incredible young man with an amazing work ethic and his leadership will be greatly missed, as will the other three seniors, Micah Smith, Michael Jones, and Chandler McCafferty who didn’t compete today.”

Bellefontaine’s Tony Stewart finished 61st out of 174 runners in Division II with a time of 17:08.

“There were 110 runners who had run faster than Tony’s PR in the state for D2 Boys and Tony knew he could do much better than that. We talked about not getting out slow on a windy day to avoid using up all of his mental and physical energy to simply catch up.  His 5:15 first mile had him at 98th which was a solid start. He moved up to 76th in the middle mile and passed another 15 in that last mile for his 61st place. He is already excited to start training this winter after taking a week off.”

Congratulations to all the runners at the state meet.