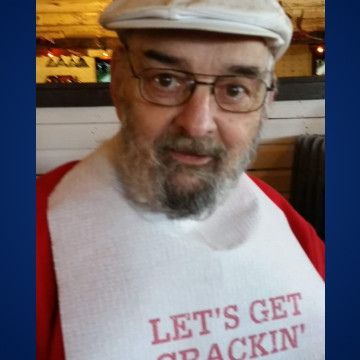 Gerald Peter (Pietruszka) Peters left this world on January 14, 2023. He was born to Stanislaw Antoni Pietruszka and Adelia Sabina Podniesinska on March 9, 1940 in Buffalo, New York. He moved to Columbus, Ohio with his parents when he was very young. After moving to Columbus, the family surname was changed to Peters.

After leaving high school Jerry joined the Navy. After leaving the Navy he met the love of his life, Linda Ann Warner. They were married on July 29, 1961. They remained married for 52 years until Linda’s death in 2013. Jerry worked as a teamster for Harmony Farms Dairy, Freezer Queen Pizza, Pepsi, and Roadway Express. He moved to Lakeview, Ohio after retiring due to an injury during the blizzard of 1978.

Jerry loved his family; he was active as a coach, scout leader, and avid fan of each of his children’s endeavors. He was a member of Indian Lake Eagles 3615 where he enjoyed many activities including dances, playing pool, and cards. He also gave back to the club holding many offices, including becoming a member of the Past Worthy Presidents following his term leading the lodge.

In his later years, he enjoyed golfing, including winning many league titles in both the Indian Lake Eagles and Indian Lake Moose leagues. The majority of these leagues were played at Prairie View Golf Course in Waynesfield.

He was a big Ohio State fan and flipped out when he thought his only grandson was going to go to college at Xichigan.

Other hobbies included operating amateur radio as KA8QIX. His proudest moment in that hobby was contacting the Space Shuttle during an event on one of their missions. He also spent a season of his life shooting black powder rifles including making his own period costume for the events, complete with a coonskin cap. He was an excellent rifleman and competed in many national muzzleloader competitions.

There will be a private memorial service at a later date. He will be interred with Linda at Walnut Hill Cemetery in New Hampshire, Ohio.

In lieu of flowers please send memorial donations to the Indian Lake Eagles scholarship fund in care of Jerry.

Arrangements are in the care of Jennings Farley & Seeley Funeral Home and Crematory West Liberty, Ohio. Email condolences may be directed to www.jenningsfarley.com.