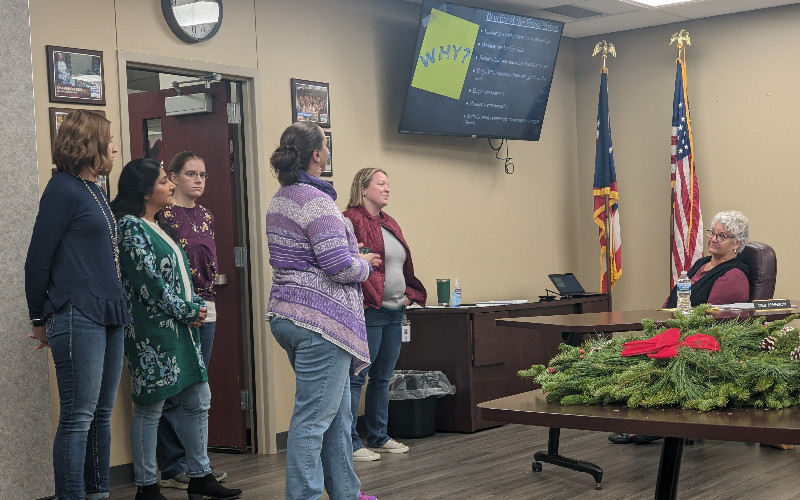 The Benjamin Logan Board of Education met in front of a full central office Monday evening.

First up on the agenda was a presentation from the middle school project, “House” organizers.

“House” is a new project that Lisa Smith and several other staff have implemented at the Benjamin Logan Middle School. Students in grades 5 through 8 are broken down into four “Houses” within the building and are working towards mental health, better grades, and much more. Logan, Monroe, Perry & Zane “Houses” are comprised of a mix of students who would not necessarily be friends, or “family members” but are learning how to work together, support each other and maybe even mentor each other. “House” is a new concept to Benjamin Logan and takes several years to build this community idea, however, the school is seeing large success and both students and teachers are enjoying the project.

Next up, Belle Center resident Brad Gerritsen approached the board, giving his full support to Mr. Scott Frederick.

Gerritsen gave a very moving recollection, stating that after a very major automobile accident involving two of his children, Mr. Frederick put aside education and offered assistance to the family in several ways. Once recovered, the children were able to successfully reenter the school setting and Gerritsen credited that to Mr. Frederick.

Frederick has approached the BOE to request a retire/rehire.

Treasurer Jennifer Sudhoff next presented to the board the November, 5-year financial forecast.

Sudhoff explained that the district would be in the black for the next several years thanks to new revenue from a local windmill project and increased property values within the district.

The board went on to approve three overnight trips for the Benjamin Logan FFA and one for the varsity wrestling team.

Dismissing into executive session to discuss employment matters, the next Benjamin Logan Board of Education meeting is set for December 19 at 6 p.m. in the Central Office.