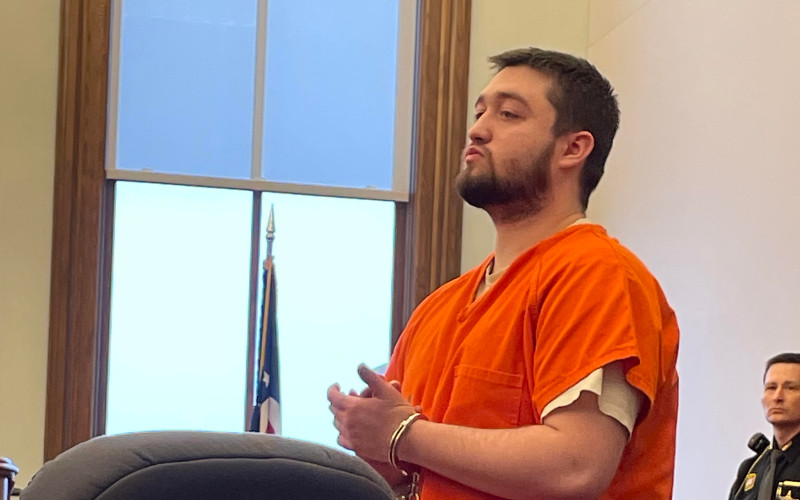 Logan County Common Pleas Judge Kevin Braig sentenced Ethan C. Grim to an aggregate sentence of 50 years to life for his role in a double murder that occurred in Bellefontaine on Thanksgiving Eve in 2019. Earlier this month, Grim was found guilty of 2 counts of complicity to commit murder, 2 counts of felonious assault, and one count each of complicity to commit aggravated burglary, aggravated robbery, and kidnapping all felonies. In addition, he was also convicted of seven firearms specifications which carry a mandatory three-year sentence each.

The charges stem from an incident that occurred at an apartment complex at 601 West Columbus Avenue on November 27, 2019, in which Anthony Scartz and Caleb Chamberlin were killed. Two other defendants in the case, Elijah Barrett and Josiah Bush, have already been sentenced for their roles in the crime.

Braig noted that Grim will be given credit for 1,155 days of jail credit.

Appearing via Zoom, Grim’s attorney Eric Allen, addressed the court and reminded Judge Braig that the Ohio Legislature has recently changed sentencing guidelines for crimes committed by defendants that were juveniles at the time. He questioned whether the youthful minds of all the defendants, who were all under 18 at the time, were capable of realizing the gravity of what they were doing. He also questioned the extent of Grim’s involvement in the event.

The new statute referenced by Allen, Ohio Revised Code (ORC) 2929.07, indicates that courts are not permitted to sentence defendants that were juveniles to life sentences. In Grim’s case, there is a possibility that Grim will be 95 years of age before he is eligible for parole. This, in effect, would be a life sentence for Grim, according to Allen.

Two family members of the victims addressed the court. Julie Scartz, aunt of Anthony Scartz, and Jayme Chamberlin, stepmother of Caleb Chamberlin both informed the court of the mental anguish their families have experienced since the incident.

Grim was asked if he wished to address the court. He stood, and faced the family members that were present. After several moments, he apologized to the families for the pain they were feeling. “I’m sorry for your loss. I’m innocent. I’m sorry for what they [the other defendants] did. The prosecutor painted a picture and I’m sorry you believed it. I’m sorry.”

Logan County prosecutor Eric Stewart recommended that the complicity to commit kidnapping charge to be merged with the aggravated robbery charge. Judge Braig accepted the recommendation.

In sentencing Grim, Braig indicated that the recent changes to the ORC restrict his ability to impose a longer sentence. He informed the court that due to this legislative action, Grim will be eligible for parole after serving 25 years. In the event he is paroled, he will need to register as a violent offender with the sheriff’s office wherever he chooses to reside.

Bush gets 75 to life