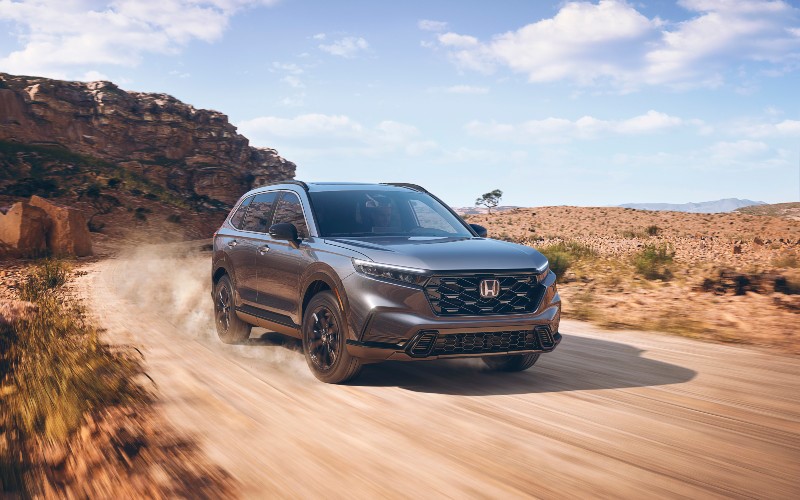 The Indiana Auto Plant (IAP) and the East Liberty Auto Plant (ELP) in Ohio, which produced the previous CR-V Hybrid, will begin production of the 2023 CR-V hybrid in the coming months. HCM is the global lead plant for CR-V hybrid production, the first time a hybrid has been built in Canada.

Representing a key step in Honda’s electrification strategy, starting with the 2023 model year, about 50% of CR-V’s annual sales in the U.S. will be powered by Honda’s new, more powerful fourth-generation two-motor hybrid-electric system.

“Knowing the importance CR-V hybrid is set to play to our overall electrification strategy, this is a proud moment for the Honda of Canada Mfg. team as we lead the start of global production of CR-V hybrid,” said Clement D’Souza, senior vice president of HCM.

Perfect for daily life or weekend escapes, the new CR-V is longer and wider with premium proportions and a significantly broader stance, further advancing the Honda rugged design direction for light trucks with a low horizontal beltline and a long, powerful front end. Honda’s most popular SUV backs up its strong new looks with a more fun-to-drive personality, more confident and refined dynamics, and increased torque and capability. For product details, please click here.

New Hybrid-Electric Powertrain Made in Ohio

All three plants producing CR-V in North America, HCM, IAP, and ELP, worked in close collaboration with the Anna Engine Plant (AEP) and the Honda Transmission Plant in Ohio (TMP-O), which are responsible for the all-new powertrain for the latest Honda electrified vehicle.

With the sales plan of the new CR-V and Accord hybrid trims expected to represent about 50% of the sales mix of each model, and three different Honda plants in North America producing the new CR-V hybrid models, both AEP and TMP-O were required to dramatically increase production volume for the new engine and hybrid system. For AEP, this increase included more in-house production of engine components and an increase in local sourcing for parts previously supplied from Japan. For example, AEP is now producing the camshaft for the engine in-house, requiring new equipment and a higher number of processes for associates. TMP-O associates will be increasing the production volume of the two-motor system by 300% (from 500 to 1500 units per day) within just the first two to three months.

“AEP associates have always supported the evolution of our business and we are proud to be the sole provider of this engine to all three of our North American CR-V frame plants,” said AEP plant lead Rick Riggle. “The team has worked hard to prepare manufacturing lines across casting, machining, and assembly operations. This is an important step toward electrification for our company and our associates will be ready to meet the challenge.”

The fourth-generation two-motor hybrid-electric system made at TMP-O features a new arrangement, switching from coaxial motors of the same size stacked on top of each other to a two-motor parallel axis system with engines of different sizes mounted side-by-side. The new system also includes new high- and low-speed lockup ratios for direct engine drive on the highway and in the city. Altogether, the new design improves responsiveness for a sportier driving feel and creates a more relaxed driving environment at highway speeds. It also allows for a higher sustained top speed, improves fuel economy, and enables up to 1,000 pounds of towing.

“TMP-O associates are proud and excited to provide next-generation components for the 2023 CR-V hybrid,” said TMP-O plant lead Gerald Bruch. “We are fully committed to our electrified future, and this is the first of many steps our associates will take in helping Honda achieve its goals for a carbon-neutral future.”

On Wednesday, associates at Honda’s East Liberty Auto Plant (ELP) celebrated the start of mass production of the all-new 2023 Honda CR-V. The first Honda plant in North America to produce CR-V in 2006, ELP has produced nearly two million CR-Vs, helping fuel its standing as America’s best-selling crossover of the past quarter century.

ELP will begin production of the CR-V hybrid model in the coming weeks, as sales of the hybrid model will represent up to 50% of CR-V annual sales, a key step in Honda’s overall electrification strategy.

“Our entire team at the East Liberty Auto Plant has responded to every challenge to launch the all-new 2023 Honda CR-V and our associates are proud to deliver another CR-V for our customers,” said ELP Plant Lead Keith Strickland. “CR-V has become a cornerstone of our success at ELP, and we’re confident the 2023 CR-V will continue to build on that legacy.”

Perfect for daily life or weekend escapes, the new CR-V is longer and wider with premium proportions and a significantly broader stance, further advancing the new Honda design direction with a low horizontal beltline and a long, powerful front end. Honda’s most popular SUV backs up its strong new looks with a fun-to-drive personality, more confident and refined dynamics, and increased torque and capability.

ELP associates worked closely with their counterparts at IAP and HCM to implement new technologies and processes for the 2023 Honda CR-V to deliver an innovative and consistently high-quality product for Honda customers in North America.

Honda and COSI kick off nationwide roadshow in Bellefontaine

Honda and COSI to launch nationwide roadshow today in Bellefontaine