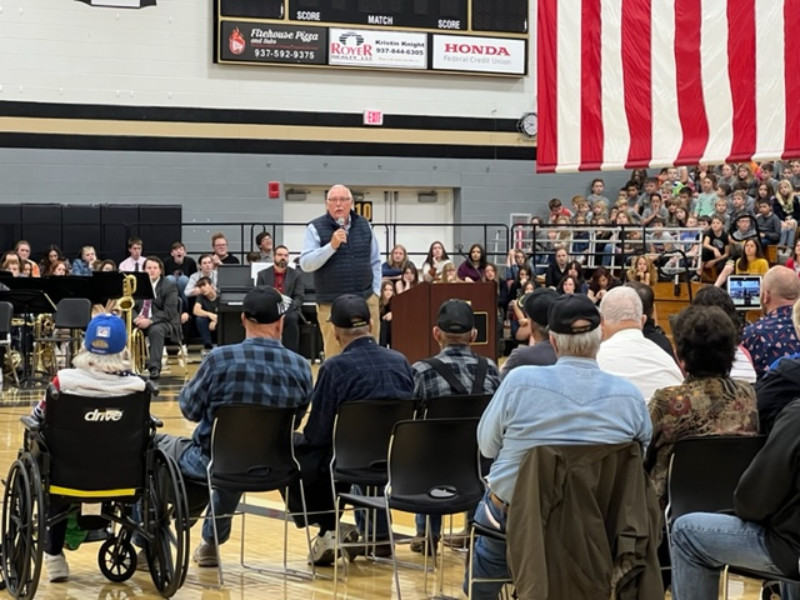 Senior Elliott Bailey welcomed the Veterans, students, staff, and guests by sharing the history of Armistice Day followed by a performance of the song called “Do You Wanna Know Freedom?” by the 4th-grade class under the direction of Mr. Tyler Young. 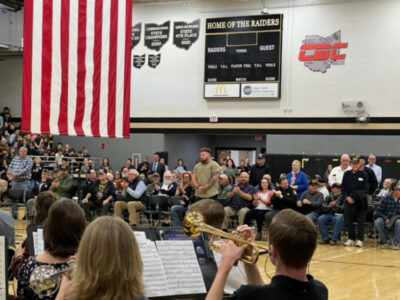 Eighth-grade students, Aleah France and Maille Ricketts presented a reading of their patriotic poems followed by a stunning performance of “America the Beautiful” by the high school choir.

This event is special because the local heroes, the Veterans, grace the staff and students with their presence. They have the opportunity to introduce themselves and to make connections with young people to help them understand the sacrifices made during their service so that the students can enjoy their freedom today.

The featured guest speaker was retired Benjamin Logan educator, Robert L. Fawcett. Fawcett grew up outside of Rushsylvania and graduated in Benjamin Logan’s first graduating class of 1971. He was drafted into the Army in 1972. Fawcett issued a challenge to the students. “I do have a challenge for all of you when this service is dismissed, I would like the veterans to stand up half on one side and half on the other, and as many of you as possible go through the line, shake their hands, look them in the eye, and tell them little five words ‘Thank you for your service.” Fawcett stated, “It never gets old for the Veterans to hear these five little words thank you for your service, we gave up our time, gave up our lives, so we could defend the freedoms that you are experiencing today. Five little words…Thank you for your service.”

Junior Joslin Wilber shared the story of Taps leading up to a playing of Taps by Graham Studebaker and Isaac Napier to conclude the event.

Student Government leaders and their advisor, Megan Hastings organized the events of the day with support from the students and instructors of the Family and Consumer Sciences department.