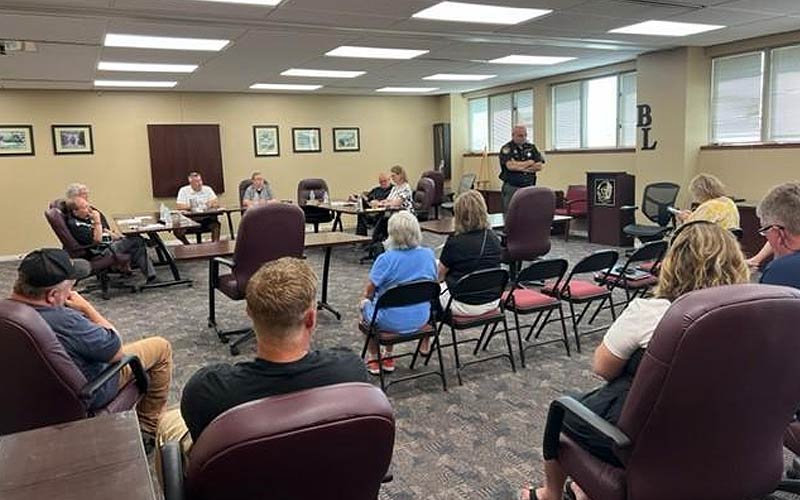 The Benjamin Logan Board of Education met in a special session Monday evening.

Superintendent John Scheu asked the board to consider a motion to approve training for a potential armed response team (training only). This is the first resolution of a two-step resolution according to HB 99 to authorize and approve the training only.

The board voted unanimously to approve the resolution to allow training.

The Logan County Sheriff’s Department will be instrumental in providing the training.

A second resolution will be presented once training is completed potentially approving the armed response team.

“Two additional uniformed security officers will be on board in the not too distant future,” according to Scheu. The district is working on figures and the Sheriff’s Office is having discussions with people of interest.

A blueprint with the windows and numbered doors in the unlikely event of an active shooter will be on file in the Sheriff’s Office.

Discussion took place regarding the use of state and federal grant dollars to better secure our building entrances. Community Health and Wellness Partners is adding an additional behavioral health counselor which means the district will have two people in that role to better serve the students.

Sheriff Dodds shared thoughts on having a lone School Resource Officer (SRO) and the time it takes to get to Benjamin Logan versus having backup on campus in addition to an SRO. He spoke about the qualifications to carry guns and noted that the ongoing training for Benjamin Logan staff would be similar to the Sheriff’s office training. The Sheriff’s Department is waiting for the state to approve the training curriculum. “ Benjamin Logan is a soft target in the middle of nowhere. It is critical to have staff that is carrying and armed,” said Dodds.

Dodds said “It has to be concealed on the person” not in a “safe”. “What kind of value do you put on a life?” Sheriff Dodds supports having an armed response team at Benjamin Logan. He wants to make sure we do this right, get the right people, and get the proper training.

The district administration will take advice from the law enforcement professionals when approving staff to be on the armed response team. A simulator and timer unit is part of the training process.

Karen Dill, BOE VP asked, “If we have an SRO in each building, would that help?” “Yes, it would, but it is still going to take time. It certainly is better than just one. The staff will be trained the same as local law enforcement,” said Dodds. “Mental health and the issue with drugs is a growing concern in Logan County.”

Board member Deb Johnson asked how likely it would be for the district to obtain additional SROs. Scheu stated, “We do have the funds and it would be significant to have two additional security officers in place before school starts.” The uniformed security officers would be on the same schedule as students working 166 days and would serve as a deterrent. The relationship-building between the students and the SRO is a powerful thing.

Board Member Scott Spriggs indicated the armed response team could be a third layer in addition to security officers, building improvements, etc.

Board Member Mark Himmeger asked about the timeline for curriculum approval from the state and grant dollars being awarded.

Dodds suggested that Benjamin Logan staff talk with people at other schools that have an armed response team in place to potentially feel more comfortable.

Audience participation: Bobbi Smith Suggested that the district have multiple meetings to help inform the parents. Shared concerns about who is being trained and the ability to offer self-defense training for all of the staff members including disarming techniques. In the heat of the moment, you do not know what you are going to do as far as aiming and pulling the trigger when put in a crisis situation. Scheu stated, “Only staff volunteers can be on the armed response team. No one will be forced to do it. A staff member or a deputy could freeze up. You do not know until the time comes.”

Sheriff Dodds shared that self-defense training could be an option for interested staff. Alice training prior to the start of the school year is being discussed. The county schools take turns hosting it on a rotational basis.

Community member, Lance Predmore, “100% in support of this resolution.”

Himmeger wants to make sure the local media reports that the board did not vote to put guns in the school.

The board employed Jeff Fay as HS Assistant Principal, 2-year limited contact, Step 0. Scheu stated, “The district had ten applicants for this position. Jeff came out ahead in three different interviews. The best choice. A big asset to the high school staff and to the district administrative team. Jeff will continue as the Head Football coach for the 22-23 school year.” There is nothing in board policy that states that an administrator cannot be a head coach.

Board President Chris Larsen was absent due to illness.