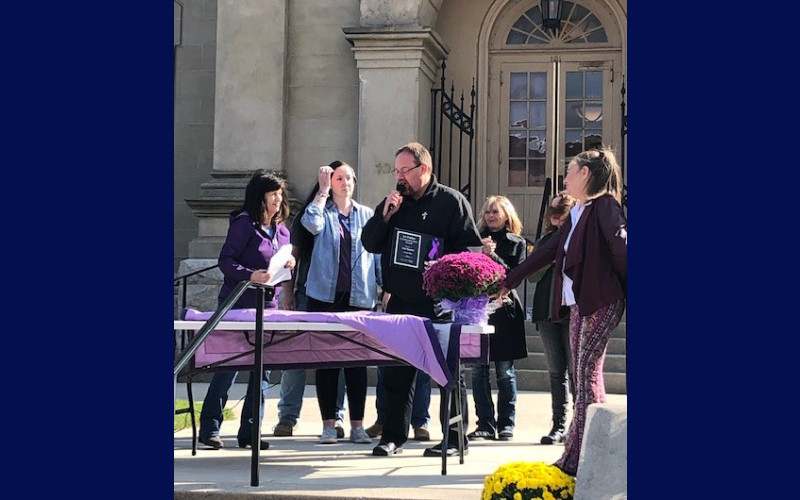 Dave Bezusko receives the Hero of the Year Award

The Soteria House (shelter for domestic violence victims who have no place to go), took in 93 women.

They also helped 274 victims with advocacy work like protection orders.

Friday morning workers and volunteers came out to bring awareness to domestic violence and to thank those who help the TCN Domestic Violence Program.

Special awards were given to the Logan County Sheriff’s Office and the Bellefontaine Police Department.  Dispatchers and officers are often the first to come in contact with domestic violence situations.  Many times they are entering a hostile and potentially dangerous situation.

The Volunteer of the Year Award was given to the Lewistown Trinity United Methodist Church.  They have been giving financially and through other needed items since 2016.  Their annual gifts average around $14,000.

The Liz Parker Community Hero Award was given to Dave Bezusko.  Dave is the Director of the United Way of Logan County.  Deb Brownlee, Program Manager of Soteria House, praised Dave’s efforts since he joined UW of Logan County to help their cause.  Brownlee said Bezusko was an integral part in helping them secure the grant they received for opening Logan County’s first domestic violence shelter for women, Soteria House.  She said Bezusko is always there when they need help.

It’s not always easy to tell if someone is in a domestic violence situation.

Aside from the obvious suspicious bruises and injuries, Brownlee says you should also look for unexplained absences from work, overboard texting or calling, coming into the office, and continuously checking, are just a few things.

Brownlee also says not to directly confront someone you believe may be in a domestic violence situation.  There are ways to offer help and guidance without being direct.

Veterans Day celebrations – Thank you for your service!