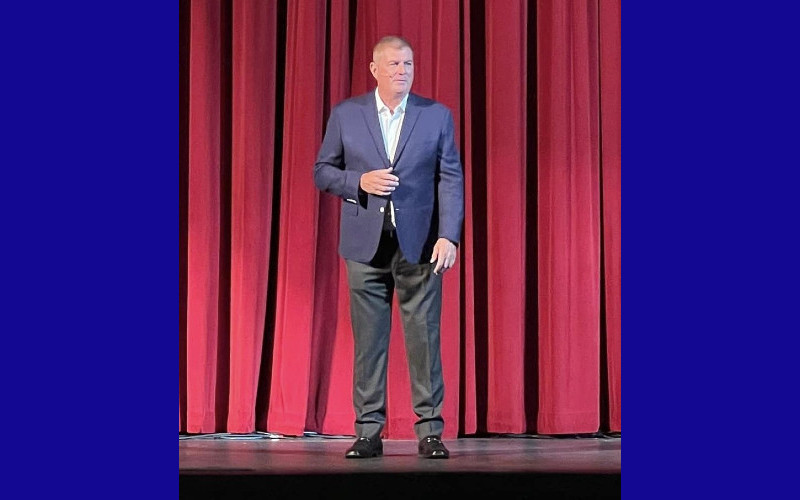 The Logan County Chamber of Commerce has been working for over three years to bring in former Navy Captain Mike Abrashoff.

Thursday morning, over 300 members from the community, including 20 students, were on hand at The Holland Theatre in Bellefontaine to listen to Abrashoff’s story.

Captain Abrashoff took one of the worst ships in the Navy and turned it into an award-winning ship.

The amazing turnaround led to someone suggesting he write a book about his different approach to managing a ship in the Navy.

After he retired, he wrote a book called It’s Your Ship-Management Techniques from the Best Damn Ship in the Navy.

Captain Abrashoff took over the USS Benfold.  As stated before, when he took over it was rated as one of the lowest ships in the Navy.

Within 2 years he had the ship winning awards.

How did he do it?

There were a lot of steps for the turnaround, but one of the things he did was sit down and talk with every sailor on the ship (that’s over 300).  He wanted to hear from them how they felt about the ship and he wanted to get to know each person.  He then told everyone, no matter what rank, that if they had an idea that would increase productivity by even 1% he wanted them to present their idea.

Not only did the captain listen to their ideas, but he implemented several.  Some went against the traditional ways of the Navy, but Abrashoff knew they were better for his ship and better for his crew.  He also knew the Navy couldn’t argue with the results when they saw the improvements on the USS Benfold.  Many of these ideas were implemented throughout the rest of the Navy.

He also worked on retention.  When he boarded the ship their retention rate was 5%.  That means 5% of his crew were staying in the Navy after their contracted time was up.  He turned that into 95%.

He accomplished this by asking each sailor about 9 months before their time was up if they were going to stay.  If they said no, he would ask why.  He then had 9 months to fix the problem.

Abrashoff spoke for about an hour telling the attentive audience several stories of his life and how he used them for different management practices.

Logan County Chamber President Ben Vollrath said both he and Chamber Director Lydia Hess read the book a few years ago and agreed they wanted Abrashoff to come to Logan County.

Scheduling conflicts and COVID put the plans on hold for a while, but another email last spring sealed the deal with Abrashoff.

Captain Abrashoff praised the Logan County Chamber of Commerce and said this is the first time a chamber of commerce has asked him to speak.

He is currently a keynote speaker and part of a consulting firm and has worked with over 1,200 organizations instilling leadership initiatives at every level.

Holland Theatre looking to light up the marquee