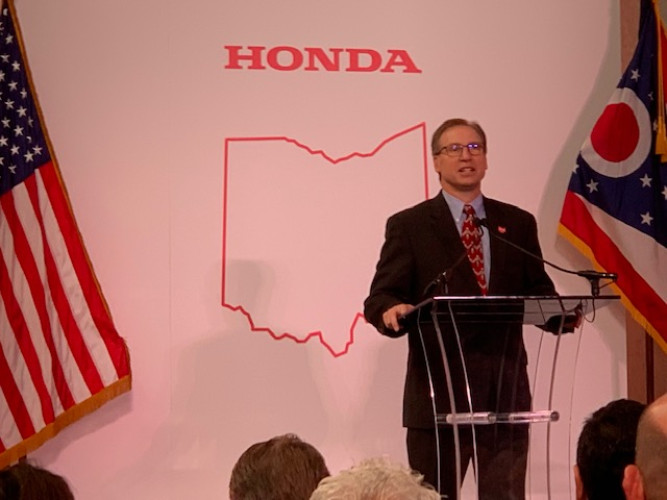 Honda and Ohio officials made two big announcements Tuesday regarding major economic development in the state.

The first is a $700 million to re-tool several of its existing auto and powertrain plants for the production of electric vehicles.

The second is a joint venture (JV) facility with LG Energy Solution (LGES) to produce the battery modules to power them.

The JV battery plant will be located in Fayette County, Ohio, about 40 miles southwest of Columbus, where the two companies will commit to investing $3.5 billion and creating 2,200 jobs, pending final government approvals. The companies’ overall investment related to the JV is projected to reach $4.4 billion.

The announcement, held 45 years to the day after Honda announced its first production facility in Ohio, on October 11, 1977, will transform Honda’s Marysville Auto Plant (MAP), East Liberty Auto Plant (ELP), and Anna Engine Plant (AEP) for the electrified future, including the creation of over 300 new jobs.

Honda plans to begin production and sales of Honda EVs in North America in 2026, based on its new Honda e:Architecture. The $700 million re-tooling will enable AEP associates to produce the battery case, to be combined with the battery modules from the JV plant on a sub-assembly line at MAP, with the complete battery unit then installed in EVs built by associates at both MAP and ELP.

These Honda facilities, along with the new EV battery plant, will serve as a new EV hub in Ohio and play a key role in developing the company’s knowledge and expertise in EV production that will be shared across Honda’s North American auto production network in the coming years. Honda’s EV hub will leverage the company’s longstanding production, product development, and purchasing operations located in Central Ohio.

The joint venture between Honda and LGES will be formally established in 2022, pending regulatory approvals. The two companies plan to begin construction in early 2023, in order to complete the new production facility by the end of 2024. The plant aims to have approximately 40GWh of annual production capacity as it starts mass production of pouch-type lithium-ion batteries by the end of 2025.

As part of its goal to achieve carbon neutrality for all products and corporate activities by 2050, Honda announced a vision to make battery-electric and fuel-cell electric vehicles represent 100% of its vehicle sales by 2040 in North America.

“This is a very challenging time for our entire industry, but also a very exciting time as Honda invests in full electric vehicle production in the Buckeye State,” said Bob Nelson (pictured), executive vice president of American Honda Motor Co., Inc. “Honda has built hybrid-electric vehicles in Ohio for a number of years, and the experience and expertise of our associates in manufacturing, product development, and purchasing will serve as an important foundation as we transition to the electrified future.”

Honda produced and sold a record of more than 100,000 electrified vehicles in the U.S. last year, including the Accord Hybrid, CR-V Hybrid, and Insight hybrid sedan. Honda’s new investment in its Ohio plants will support the production of electric vehicles and EV components.