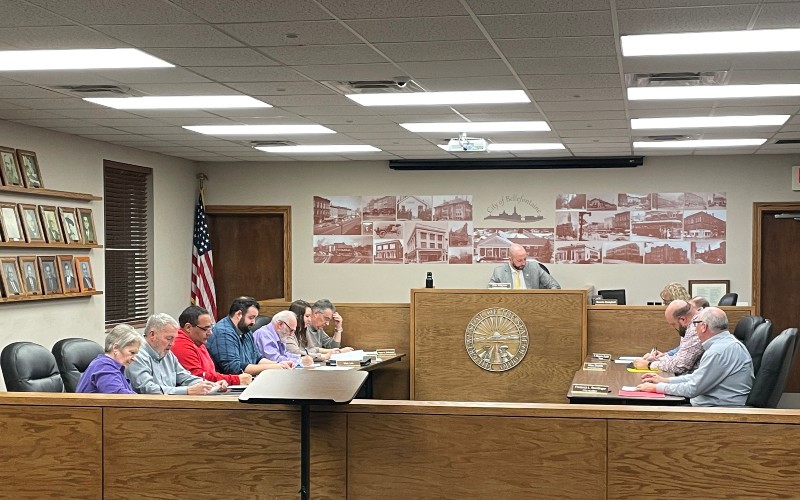 The recent awarding of two grants was the highlight of the final Bellefontaine City Council meeting of 2022 Tuesday evening.

The SAFER grant, totaling $880,000 and payable over three years, is from FEMA that will enable the city of Bellefontaine to hire three new firefighters. These hires will enable the fire department to add one firefighter to each shift and will cover all their compensation including benefits.

“The fact that we are able to utilize grant funding to increase our staffing is a unique opportunity that we are excited about. Increasing the number of firefighters improves our ability to respond, especially during times of high call volumes, and increases the safety of the public and our entire team during emergent situations. Adding these additional staff members for multiple years at zero cost to the city is certainly a tremendous benefit to all of us,” Stahler said.

The other grant is from the Ohio Department of Development and will allow the city to seek bids to demolish 14 blighted properties in the city. Stahler said the total grant of $500,000 was awarded to Logan County. Bellefontaine has named the 14 properties and the grant funding will be used to raze the buildings. Bids for the project are due January 3, 2023.

“We are thankful for funding from the state and for our partnership with the Logan County Land Bank to participate in this project, “ Stahler said. “Historically, demolition projects are difficult to find funding for, and the fact that we will see 14 blighted properties removed in a short period of time is significant. It’s a relief to the surrounding property owners, and a big win for neighborhoods throughout our city.”

In other council action, Mayor Stahler told the council that an offer has been made to an individual to replace retiring city engineer Tim Notestine. Stahler said he will be able to divulge the name of the new hire after the first of the year.

He also told the council that he recently participated in the swearing-in of a new police officer, bringing the total number of officers to 30, one short of the allotted number of officers. The new officer will be scheduled to attend the Ohio Peace Officer Academy in January of next year.

Mayor Stahler also recommended to the council that Tammy Gump and Dr. Jason E. Robson be named to the Tax Review Board. Council adopted Stahler’s recommendations.

Service Safety Director Wes Dodds informed the council that the traffic signal at the corner of East Sandusky Street and North Hayes Road which was knocked down last week needs to have a new pole set before the signal can be replaced. In the meantime, a temporary has been put in place and all four directions are on a flashing red signal.

Dodds said that his office has brought in an outside contractor to set the pole, but the waiting time is six months. Other options are being looked at and the signal will be replaced as soon as possible.

He also told the council that grant funding for the Ohio TechCred program has been received, meaning individuals will be able to start training programs very soon.

Since this was the final council meeting before the end of the year, several ordinances were adopted, many having to have the required three readings waived due to time constraints. Most of the ordinances dealt with finances including compensation and appropriations that will enable the city to spend money after the first of the year.