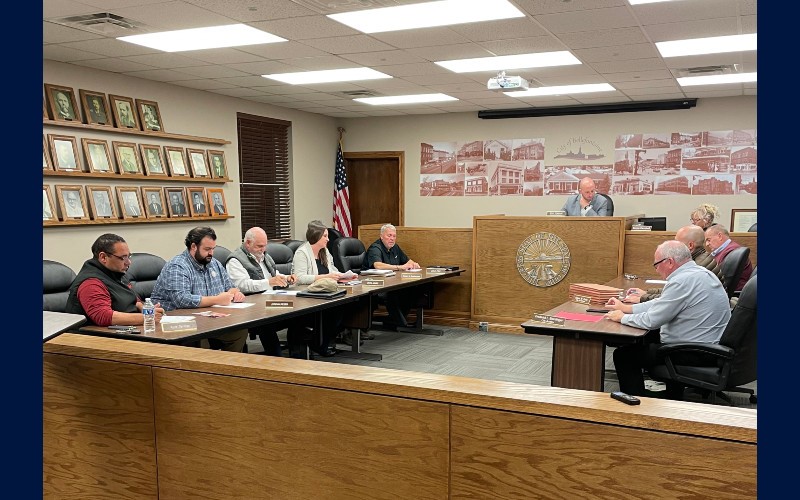 Numerous ordinances were given readings at the Bellefontaine City Council meeting last night. Mayor Ben Stahler started the meeting by informing council that he recently attended a meeting of the Mid-Ohio Regional Planning Commission. Stahler said that Bellefontaine hosted the meeting with representatives from 10 other counties in the area.

Mayor Stahler also told council that he will be swearing in a new police officer next week that will fill the position created by a retirement. That officer, Greg VanBuskirk, was rehired as a part-time civilian evidence room manager.

Stahler also gave the report for Service/Safety Director Wes Dodds who was attending the Lake Township meeting representing the city in an annexation action.

Stahler mentioned the recently completed paving and striping of South Main Street. He also talked about leaf collection, which just started the second round. He reminded council that the collection will continue until the leaves are all gone, should they get calls from constituents. He also reminded council that the first Christmas parade will be held on December 2nd, with traffic flow through downtown being completely cut off.

Moving to other administrative reports, City Auditor Fred Brentlinger informed the council that he was presenting two ordinances for consideration. The first was for appropriations for the temporary budget that must be in place before the end of the year. This temporary budget, which will ensure the city can continue operating in the early stages of 2023, is for $11,427,170 for the general fund, the total will be $30,463155. This figure allows for a 3% increase in wages.

Next, Logan County Chamber of Commerce President Ben Vollrath spoke about TechCred, a state program that helps businesses train their employees in several different areas. Businesses can apply for up to $30,000 in repayment for training for their employees. The program, in existence for around two years, has seen approximately 18 local businesses take advantage of this program.

Also included were ordinances that provided for a 3% wage increase for city supervisors, clerical workers, and service workers. All ordinances given their third readings were adopted.