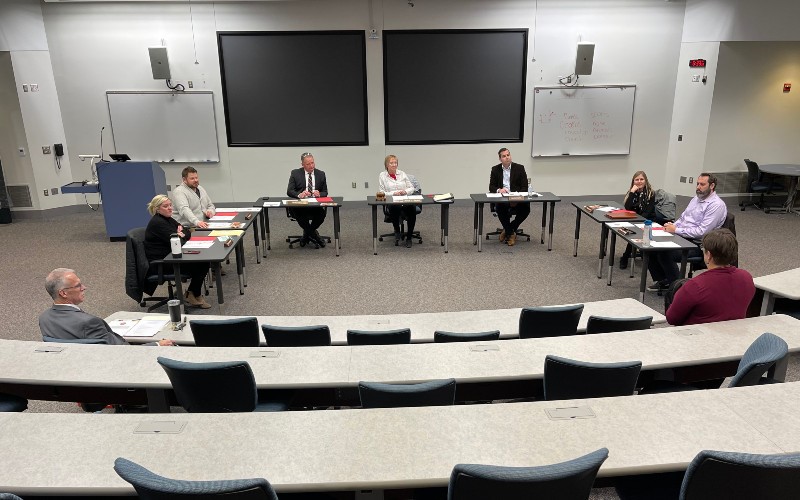 The Bellefontaine Board of Education learned more about the district’s financial outlook during their monthly meeting Monday night.

Wasson reported the district is currently in deficit spending. That trend is projected to continue through fiscal year ’27.

Wasson gave a similar outlook when the five-year forecast was detailed at the May board meeting.

He said that salaries and benefits remain the biggest expenditures for the district.

Salaries and benefits account for 82 percent of the district’s expenses.

However, BCS is expected to maintain a positive cash balance through the fiscal year 2026.

Finally, Wasson is optimistic the board can limit healthcare cost increases to around five percent per year.

The board heard two brief presentations.

Ramsey said there have been 81 student referrals this school year.

Reser, who’s the trip coordinator, said that more than 70 eighth-graders have already signed up to visit our nation’s capital on May 22-25, 2023.

Students will visit The White House, nearby monuments, and Gettysburg, Pennsylvania.

The cost is $749 per student (if registered by the end of November).

A spring fundraiser is planned to help offset the cost.

The board will vote on the trip approval at the December board meeting.

In personnel, the board accepted the retirements of longtime teachers Linda McQuinley and Rob Rogan.

Rosalind Brown was hired as a substitute teacher.

Kylie Croston was approved to be a home instructor/tutor for the ’22-’23 school year.

The following employees were hired:

The following substitute appointments were approved:

In other personnel, Katie Cornell was hired as a secretary at Bellefontaine Elementary School. Previously, she was a custodian.

Beth Overs and Kourtney Walker were hired as substitute teachers.

Chelsea Johnson was hired as an assistant swim coach at BHS.

The board approved the indoor track program.

The board reappointed Anne Reames to continue serving as Bellefontaine City Schools’ representative on the Ohio Hi-Point Board of Education.

Finally, the board recognized November Seniors of the Month Olivia Ullom and Sullivan Ashcraft.

The next board meeting will be on December 19th at 6:30 p.m. in the Distance Learning Center.

Bauer announces retirement from Board of DD