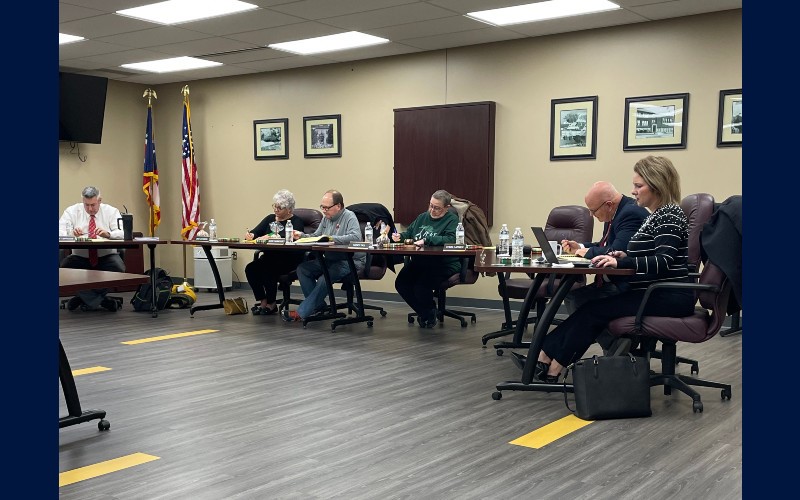 The Benjamin Logan Board of Education began the final meeting of 2022 with a moment of silence for teacher Brad Jones. Jones, a longtime teacher at the high school, passed away last week.

In action items, the board approved an updated 457 plan that allows district employees to contribute to retirement plans. The latest version includes the age 59.5 provision, which will permit in-service distributions for participants who are age 59.5 or older. It also adds language to provide for certain aspects of the CARES Act.

The board also approved a memorandum of understanding with the Benjamin Logan Education Association that added the position of Ski Club Advisor to the Supplemental Salary Schedule. Superintendent Scheu has named Kelly Gibson to the Ski Club position as a paid position.

Superintendent Scheu also informed the board that they needed to authorize the use of paper format for testing for the Third Grade Assessment that is required by the State of Ohio. Since the state prefers online testing, the board needed to approve the paper tests.

The board also tendered the resignation of middle school principal Scott Frederick effective February 27, 2023. Frederick will remain as principal for the remainder of the school year and will serve his final year of employment as the assistant principal.

Jeff Fay, vice principal at the high school then recognized the Benjamin Logan Seniors of the Month for September, October, November, and December.

September Seniors of the Month are Elliott Bailey, daughter of Jarvey and Deanne Bailey, and Preston Bothel, son of Jeff and Christie Bothel.

October Seniors of the Month are Alanna Gibson, daughter of Troy and Kelly Gibson, and Lucas McKenrick, son of Chris and Jennifer McKenrick.

November Seniors of the Month are Brielle Moorhouse, daughter of Kevin and Blythe Moorehouse, and Isaac Napier, son of Daniel and Stephanie Napier.

December Seniors of the Month are Rhea Harner, daughter of Rich and Tiann Harner, and Lukas Hemmelgarn, son of Brian and Trisha Hemmelgarn.

Several residents addressed the board concerning the Fountain Point Solar Project. At issue with many of the residents was a letter of support purportedly from Superintendent Scheu to the Ohio Public Siting Board, the state agency that assesses the impact of major utility facilities constructed within the state.

In the letter, Scheu stated that he was writing at the request of the entire board in support of the solar project. The residents were unaware of any board action directing Scheu to write the letter.

In other board action, Superintendent Scheu informed the board that Governor Mike DeWine has announced that a team has been assembled to begin approving curriculum plans for the armed response team training. He said that 22 staff members have agreed to participate in training sessions when they become available.

The board must still give final approval to the formation of an armed response team once training has been completed. Scheu estimated that training sessions will begin shortly after the first of the year.

Superintendent Scheu also informed the board that the district’s new School Resource Officers have expressed to him that they are glad to be with the district. These hires mean there is a deputy at each school building during the school day.