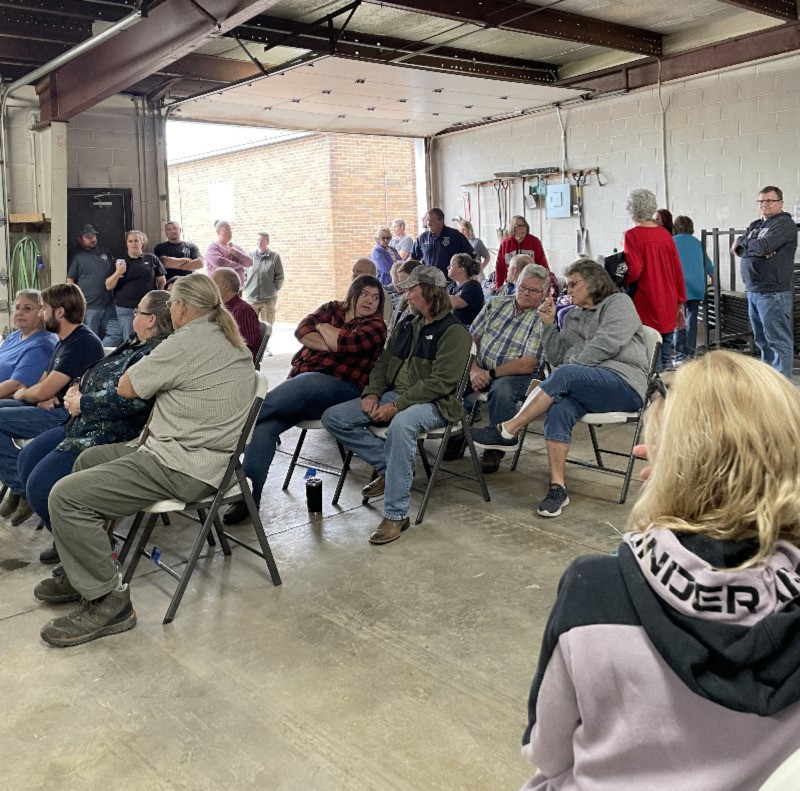 The Rushcreek Township trustees called a special meeting to solicit public comments concerning the future of the Rushcreek Township Volunteer Fire and EMS Departments. Originally slated for the township building on Mill Street, the meeting had to be moved to the Township fire department to accommodate the over 50 residents that showed up.

Prior to seeking public input, the trustees voted to act as interveners for the Fountain Point solar project. Additionally, the trustees installed Joshua Varble as the new Zoning Inspector for the township.

After these two regular business items were dispatched, trustee chairman Jeff Spencer addressed the crowd. He began by outlining the requests made by the trustees to the four township departments: Cemetery, Roads, Fire, and EMS. Spencer said that the trustees requested each department submit a budget, begin monthly reporting of activities, and submit a 3-year plan for equipment management including a yearly inventory.

At that time, Sheriff Dodds and Dispatch Sergeant Christy Astorino addressed the issue of mutual aid. Dodds assured the residents that his office would provide assistance to the residents of the township. He confirmed the sequence of events involving the call from Spencer and the decision by Fisher to suspend services pending resolution. Additionally, Astorino informed the gathering on how dispatching for fire and EMS services happen.

She said that every call that is received is dual-dispatched, meaning that multiple agencies are notified in the event of emergencies that are called into their office. Sheriff Dodds also spoke of the serious shortage of EMS and fire volunteers not only in our area but countywide.

The citizens that addressed the trustees were all hopeful that a resolution could be reached between all parties involved. Several residents voiced their concerns as well as their desire that an agreement could be reached.

At one point, it was asked, since EMS staff did not resign, could the township resume EMS service and continue to try to resolve the fire issue. After the public portion of the meeting, and upon consultation with the County Prosecutor, EMS service for the township was restarted.

This is a continuing story.