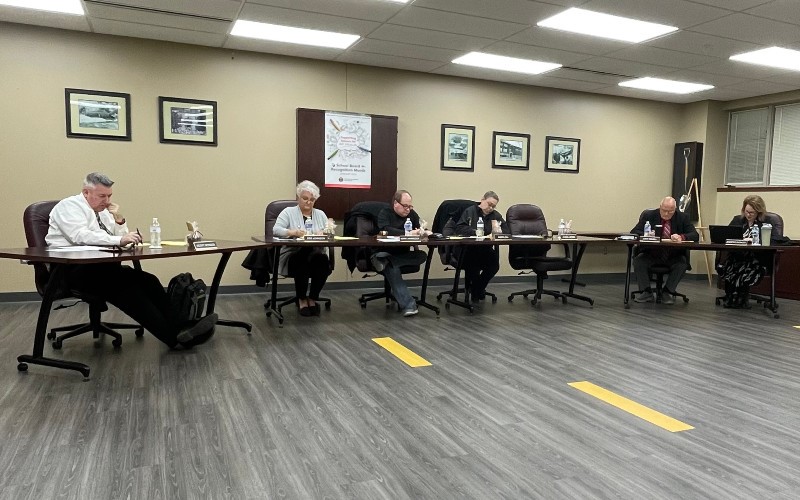 Several residents spoke out in favor of the Fountain Point Solar Panel project at the Benjamin Logan Board of Education meeting Monday night.

The meeting opened with the annual organizational session which saw Mark Himmeger elected as President and Scott Spriggs voted in as Vice President. The board also established their meeting schedule for the rest of the year, set board member pay at $125 per meeting, and addressed several other administrative matters.

At the conclusion of the organizational session, the board moved into its regular meeting. District Treasurer Jennifer Sudhoff informed the board that two bids for new wrestling mats were received. It was recommended that the quote from Dollamur be accepted for $29,120.00.

Also, Jim Rowan, a representative with the Ohio Association of School Business Officials (OASBO), presented Sudhoff with a certificate from the organization and announced the creation of a $1,000 scholarship that will be awarded to a graduating senior while Sudhoff remains with the organization.

Activities Director Beau Harmon updated the board on the resurfacing and replacement of the track and football field. He informed the board that the track is in serious need of repair, with some schools refusing to attend track meets because of the condition of the track.

The plan, according to Harmon, is to install a turf field that can also be used by both soccer teams. There will be a new scoreboard installed and, if there are funds remaining, new scoreboards will be purchased for the baseball and softball teams. The price tag for the replacement of the field and resurfacing of the track is in the area of $1.1 to 1.2 million which does not include the scoreboards. It is hoped that the work will begin in April after the track season and will be completed by the first home football game in late August.

During the Superintendent’s Report, Sally Stolly, Director of Administrative Services, shared details regarding the upcoming Communication Audit that the district is involved with through the National School Public Relations Association. In the near future, staff, parents, and community members will be asked to participate in a survey. Through the SCoPE survey, districts uncover where communications are working, where they are not, and most importantly, what they can do about it. In addition, internal and external stakeholders will be invited to participate in one of 10 virtual focus groups to address the specific communication needs of the district. The district will be seeking a broad representation of voices and viewpoints in each group. NSPRA maintains the anonymity of the focus group participants.

Superintendent John Scheu informed the board that High School music teacher Myles Bowers and art teacher Jennifer Davis were both awarded a $500 grant from the Martha Holden Jennings Foundation. The grants will be used to enhance the work both teachers are already doing. He also presented the board with new hires and supplemental hiring.

Other grants accepted were from the Logan County Electric Cooperative ($500 – Energizing Education), and from the Columbus Foundation ($5,000 – OSLN Stem Classroom Grant) both for Gretchen Powell.

The board also accepted the resignation of Susan Ridge who is the Elementary Guidance Counselor, effective July 31, 2023, for the purpose of retirement. Ridge served 35 years in the school district.

Approximately 50 residents were in attendance, and eight individuals addressed the board. The comments were concerning the proposed Fountain Point Solar project. Six of the residents spoke in favor of the project and two voiced concerns. Most of the concerns involved the unreliability of solar power as well as losing good farmland to the project.

Several of the project’s detractors, who spoke on the condition of anonymity, were upset about a letter purportedly sent to the Ohio Power Siting Board from Superintendent Scheu that voiced support for the project. In the letter, according to the group, Superintendent Scheu indicated that he had been directed by the school board to send the letter to the Siting Board.

On the website, there is a clarification about the letter. According to the website, the letter “was not an official resolution approved by the board nor was this discussed at a board meeting…. This was simply a letter of support and is nonbinding [sic] since there was no official action from the school board.”

The Benjamin Logan Board of Education will meet again on Monday, February 27th.

* Sally Stolly made a contribution to the article

Yoder named BCS board president; board members thanked for their service