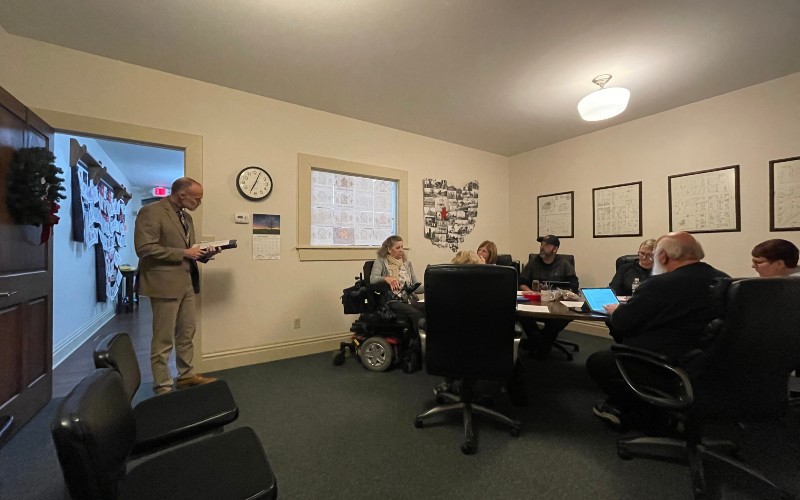 A visit by Municipal Court Judge candidate Jacob Estes opened the West Liberty Village council meeting Monday night. Estes appeared before the council on his tour of all the villages in the county in advance of the May 2023 primary. Estes, originally of Lima, Ohio, informed council that he and his family have called the West Liberty area home for many years and he looks forward to serving the community in the role of Municipal Court judge.

In other council action, council president Jayne Griffin updated the council on the recent fundraising efforts the West Columbus Street Bridge Committee has had. She said that a recent Christmas pop-up store raised approximately $600, and the silent auction is continuing, with bids being due Friday at 6 p.m. Interested persons can see the items for the auction in the council office in the village building.

Council also learned about a proposed new app that village residents can download that will give them access to customizable alerts, access to council minutes, the ability to pay utility bills, and important dates. Council took no action on the app, choosing instead to wait until more information is available.

Several changes to the village policy and procedure manual were discussed. Mayor Jill McKelvey said that she discussed the proposed changes with the village supervisors and presented the changes for their consideration.

An ordinance that would allow for a 3% increase for village supervisors and a $.50 per hour raise for all other village employees was given its first of three readings. The ordinance is set to be adopted at the January 27, 2023 meeting.

Several committees also gave reports including the Parks and Recreation committee. Councilman Trent Spriggs said that Mary Rutan Hospital will be donating funds to place paved walking areas at the village splash pad. Additionally, benches are being planned for along the walking trail. Spriggs said that upgrades are being planned to the concession stand at Dodge Park.

Additionally, it was discussed about putting cameras at the splash pad, Dodge, and Ricketts Park. Spriggs said that he is in the process of soliciting quotes for the project.

In her report, Mayor McKelvey told the council that to date there have been 40 new residents moved into West Liberty. She said gift bags will be going out to the newest residents in the coming days. She also informed council of the upcoming Tour of Homes on December 10th.

West Liberty Council will next meet on December 12th at 7 p.m.