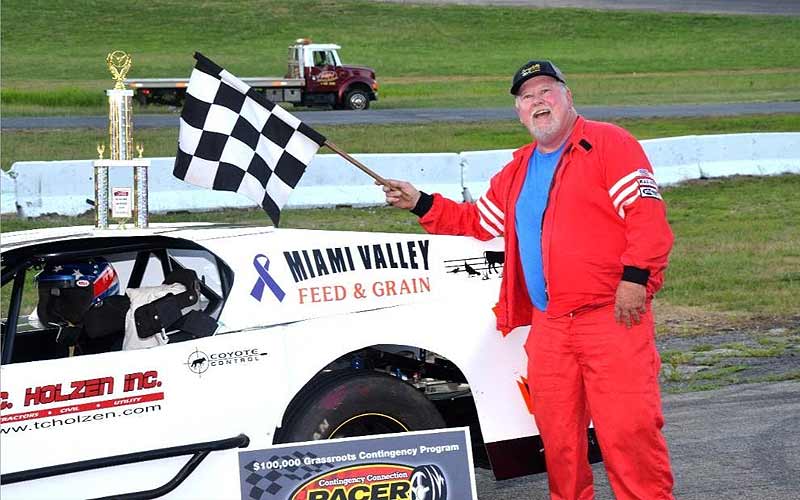 Shady Bowl Speedway was blessed again to have great weather for racing Saturday night. It was “Race car rides for Kids Night.”

The young fans got to take a lap around the oval. It was hard sometimes to decide who had the biggest smiles, the kids or the drivers. It is safe to say, they all had fun. A big thanks to the drivers and car owners for allowing the kids to ride along. It made for a night none will soon forget.

It was also another great quick program, led by timing and scoring director Cheri Mahaffey and her staff in the tower, and promoter Rick Young kept things flowing on the track. The track and fire crews were outstanding as usual. Pit stewards Herb Newman and Chris Owens kept the show going by having the cars lined when they hit the track The final person is the person who controls the racetrack, our starter Charlie Gifford. All these people worked together to get all the races over around 10:30

The Wooten Automotive and Towing of St. Paris Modifieds were first up. Troy’s Jerry Stapleton jumped out front at the drop of the green flag. Stapleton was the man to beat and several tried but came up just short. Chris Parker and Kyle Purvis took turns taking a shot at Stapleton in his Terry’s Radiator sponsored ride. Stapleton led all 30 laps to pick up his fourth win of the season. Parker was second, with Purvis third, Logan McPherson fourth, and Hayden Wren fifth. Austin Eaton set a fast time with a 13.740 lap. McPherson won the dash, with heat honors going to Stapleton.

The streak is over and the bounty is paid. Buck Purtee, who had won every Bullet Liners of Dayton Thunder Car main this season was beaten by Union, OH driver Brad Blue. Blue led all the way in his Freddies Franks and Burgers sponsored chevy. He picked up an extra $400.00 in bounty bucks. Robert Roush, Purtee, Scott Drake, and Corey Wooten chased him to the checker. The fast qualifier was Frankie Oakes (15.391). The dash winner was Purtee, with Hunter Hicks winning the heat race.

The Harrod Septic Solutions Compact main was a great race with several drivers battling for the lead. The finish was up in the air until the checker flew. Well not quite clear yet. Josh Sage of Piqua took the checker. Had the race winners’ interviews and photos taken. But the hand of doom was about to fall. Sages’ car was disqualified in a post-race inspection. Bo Hoelscher of Riverside was declared the winner in his BJ Body Shop Cavalier. Tyler Mahaffey was a close second, followed by Steve Duty, Jimmy McElfresh, and Nick Hall. Michael Litchfield was a fast qualifier (16.806) of the 34-car field. Mahaffey was the dash winner, Josh Sage, and Daylan Karnes.

The Wooten Automotive and Towing Street Stocks of Urbana closed out the night’s action. The 25-lap feature saw Josh Smith jump out front and lead the first 24 laps before Chris Parker took command in his Buckeye Nation Mechanical sponsored stocker on the last lap to carry the checker. The Bellefontaine resident watched in his rear-view mirror, as Smith finished second, fast qualifier (14.763) Jason Mahaffey was third, Bob Coppock fourth, and Richard Roush fifth. Smith won the dash, with the heat win going to Coppock.

This Saturday the Bowl will host the third leg of the Ohio State 300 for the Dave Nagel Excavating late models. The final leg of the Ohio 300 will be on August 26 at KilKare Speedway in Xenia Ohio. The July 16th night at the Bowl will also be Harley Davidson Night-American Cancer Society-Relay for Life Night. The Wooten Automotive and Towing of Urbana Street Stocks, the Harrod Septic Solutions Compacts, and the Bullet Liners of Dayton Thunder Cars will also be in action racing will start at 6:30

Josh Sage was flagged as the winner of the event. However, his car failed a post-race inspection and he was disqualified.