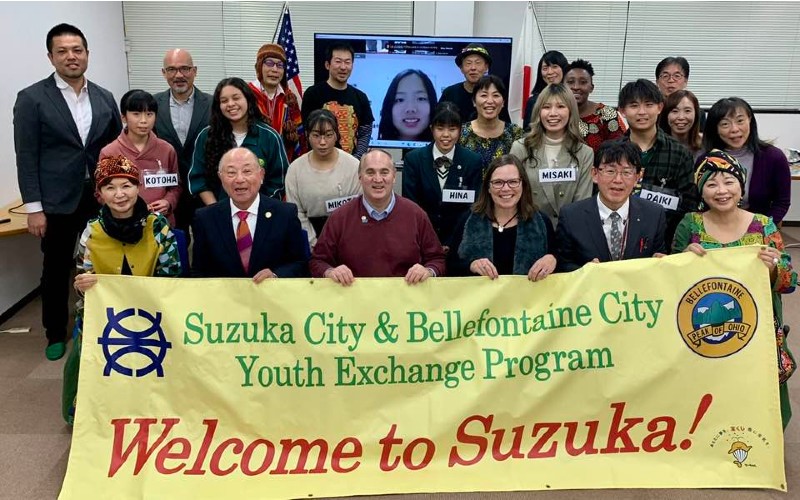 In 1991, the City of Bellefontaine signed a Friendship Pact with the city of Suzuka, Japan. Under the leadership of then-mayor Richard Vicario, that pact began a sister-city relationship that continues to thrive to this day.

During the summer of 1991, Suzuka sent several students to Bellefontaine as exchange students, and the following summer, then councilman Stahler and his wife Sara accompanied a group of students from Bellefontaine to Suzuka. According to Stahler’s estimation, there have been in excess of 600 students who have made the trip here or to Suzuka in these 30 years.

Due to Covid restrictions, there have been no trips since 2019, but plans are in the works to restart the program in the summer of 2023.

Earlier this year, Bellefontaine Mayor Ben Stahler received an invitation to attend a celebration marking the 80th anniversary of the incorporation of Suzuka. Stahler stated that in 1942, 13 villages decided to form a city that is now known as Suzuka. Stahler and his wife along with the vice-mayor from Le Mans, France, Suzuka’s other sister city, attended the celebration and festivities.

The day after the formal celebration, Mayor Stahler boarded a Shinkansen train and traveled to Shima where the 2016 G7 Summit was held. They toured the hotel where the summit was held.

They also visited with people that work with the International Friendship Center and the student exchange program. Stahler visited students whom he has met with via Zoom calls for the last few years that have been to Bellefontaine via the exchange program. He said that it was fun reconnecting with the now-young adults.

Stahler noted that relationships are very important to the Japanese. Since there is a large Honda presence in Suzuka as well as west central Ohio, strengthening these relationships is vital to future endeavors. He noted that several local residents have visited Suzuka while employed with Honda.

In fact, Stahler said that a trip to Tokyo in 2023 is already in the works. This trip will be highlighted by a summit involving business representatives from all over the Midwest United States and Japanese industry representatives. In 2024, this summit will be held in Columbus.

While some may scoff at the notion of attending a two-day trip halfway around the world as a waste of resources, Stahler disagrees: “Strengthening the bonds we have forged with Suzuka will be beneficial to our area for years to come.”