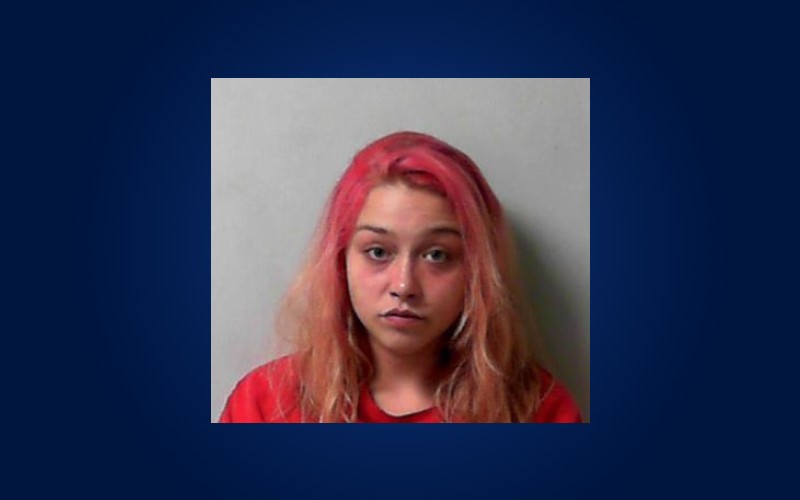 On Thursday afternoon, just before 5:30, officers were on patrol in the area of West Brown Avenue and North Main Street. They observed Betty Dolan, 27, at large, walking through an alley.

Authorities stopped Dolan and informed her there was a warrant for her arrest.

She was asked if she had anything illegal on her and she said she wanted to get rid of a blunt she had in her cigarette pack. Dolan started to distance herself from officers.

She was told to step closer, and that she was under arrest. Dolan pulled out a clear plastic baggie from under her shirt.

She was advised to drop the baggie. She quickly placed it into her mouth and attempted to swallow it.

Dolan was ordered several times to spit it out and not swallow the baggie.

She continued and officers grabbed her arm. She attempted to pull away.

Authorities noticed Dolan had a small can of pepper spray on her key chain and had it in her hand.

She was taken to the ground, the spray was removed from her hand, and she eventually spit the baggie out.

Dolan was charged with felony possession of drugs, resisting arrest, and tampering with evidence, and she was served her warrant.

She was lodged in the Logan County Jail.

The suspected crack was tested and came back positive. It was sent to the lab for further testing.

On Friday evening, at 8 o’clock, the BPD K9 Unit was on patrol on Heritage Drive, near Parkwood Road, when they observed Calvin Board, 34, of Bellefontaine, walking eastbound.

Authorities were familiar with Board and ran a warrant check and it showed he had an outstanding warrant for his arrest through the Bellefontaine Municipal Court.

Officers made contact with Board, and at first, he did not cooperate.

He was told to place his hands on the hood of the cruiser.

Authorities secured his right arm and hand and explained he had a warrant. Board then tensed up.

Officers told Board if he resisted or ran, K9 Boodik would be released.

He was asked if he had anything illegal on him and Board admitted he had cocaine in his pocket.

The suspected cocaine was found and nothing else illegal was recovered on Board.

He was arrested and lodged in the Logan County Jail on his outstanding warrant for failure to appear and a new charge of felony possession of cocaine.

The cocaine was tested and came back positive.