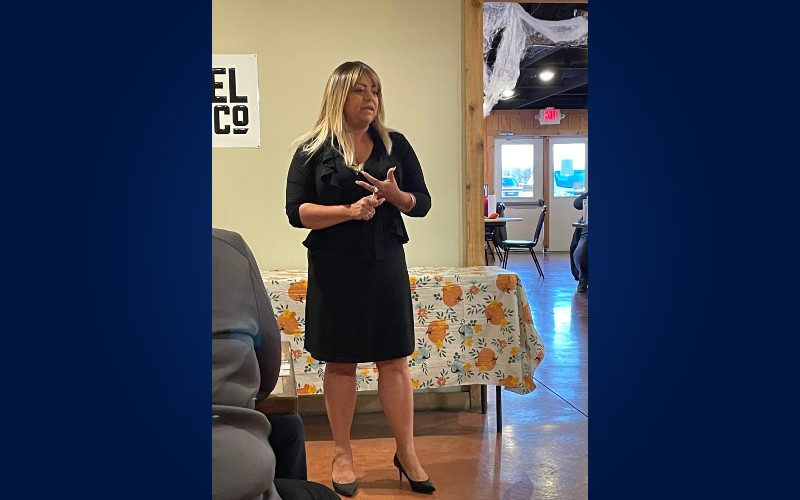 Wilson began her talk by drawing a contrast between herself and Jordan. She mentioned that due to redistricting, more than 50% of the 4th District is new to Jordan, and, “they don’t like him.” Citing the January 6th attacks on the US Capitol and the ongoing allegations of a cover-up of sexual assaults while at Ohio State, Wilson stated that the people she has talked to what positive change and they’re ready for someone that will “do something and not just complain.”

Wilson set herself up as someone that is a doer, and she is ready to go to Washington to do something for her people. She mentioned that she is already in the process of writing legislation, and she has set a goal for herself to introduce as much legislation as she possibly can on her first day in office.

She identified four key planks in her platform. First, she intends to fight for our democracy. She said she will fight to save our country and that she will seek to protect the integrity of our country. She will also fight for women’s rights. Women, Wilson said, make up over 50% of the population of the country yet they hold few seats in state governments and fewer seats on the national level.

Making the country safer is also important for Wilson. She is intent on reducing violence in the United States. She vowed to crack down on radical extremist groups and racism. Part of this also includes making the internet safer by halting the spread of disinformation and hate speech.

Finally, she will do what she can to combat the effects of inflation. Wilson was critical of Jordan’s vote on the CHIPS Act and said that she will go to Washington to do something. Part of her plan to help her constituents will be to stop the practice of taxing Social Security benefits and work to cut taxes.

Wilson took a few questions from the audience. One person commented on the lack of civics being taught in schools and asked about her position on education. Wilson spoke of the importance of getting a quality education and said she supports funding education so that everyone can have access to a first-rate education.

West Liberty’s Christmas in the Village