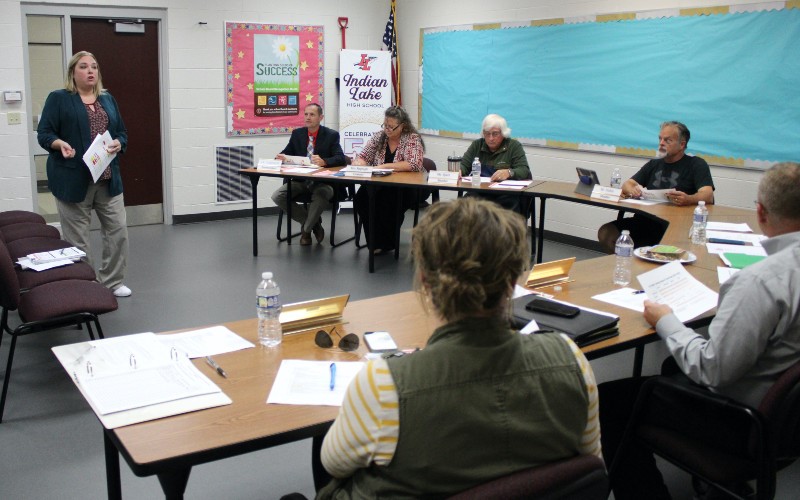 IL Director of Curriculum and Gifted Services Kelli Tebbe-Miller presents to the board. Photo from Jamie Ross

Academic achievement at Indian Lake Schools was the headline at the September regular Board of Education Meeting.

Indian Lake Director of Curriculum and Gifted Services Kelli Tebbe-Miller broke down the state report card numbers that were recently released by the Ohio Department of Education. Indian Lake Schools earned 4.5 out of a possible 5 stars on the new rating system. Tebbe-Miller explains that Indian Lake is exceeding or significantly exceeding state standards and that ranking puts the district in the top tier of districts in Ohio.

She explains there’s a lot to celebrate, “We saw performance increasing from the previous four years in almost every single area. And if you look across county comparisons, we had the top scores in a lot of the academic areas in third through twelfth grade. We’re really proud of that.”

Some of the areas of excellence included a 5-star graduation rate, a 5-star gap closing rate, and 5-star progress scores. She said the district met the early literacy standard and had exceptional achievement across the board. Dr. Underwood attributes this success to the hard work of the Indian Lake staff and a community that supported in-person schooling through the pandemic.

Tebbe-Miller said according to a recent article in the Cleveland Plain Dealer, Indian Lake ranked 56th in Ohio out of 607 districts.

Indian Lake Music Boosters President April King also presented. She explained that the boosters raise money through concession stands at events and that money is used to enhance the experience of every student involved in the band, choir, or music education at Indian Lake. She also presented Superintendent Rob Underwood with a two-thousand dollar check to go toward new risers for the choir and show choirs.

Dr. Underwood updated the board on the year-long ILMS/ILHS roof and EIFS project, saying it should be finished in the next few weeks. The board then voted to advertise for bids for a potential air conditioning project to update HVAC at the high school.

In addition, the board approved a five-year contract with Dr. Underwood, saying that in his time as superintendent he has improved the culture, report card results, and fiscal standing of the district.

The board also recognized the upcoming retirements of long-time educators Lisa Reese and JoAnne (Brademeyer) Earl. Both teachers plan to retire at the end of the school year. Finally, the board officially commended Washington Township Police Chief Rick Core on his 33 years of service to the township and district. Chief Core will retire at the end of the month.

Superintendent Underwood said, “He works tirelessly to make sure we can have school every day in a good, safe environment and I just can’t thank him enough for the work he’s done for Indian Lake.”

The next Indian Lake Board of Education meeting is Monday, October 17th at 6:30 pm in the Board Office.